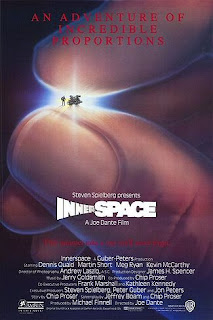 Obstreperous test pilot Tuck Pendleton (Dennis Quaid) volunteers for a miniaturisation experiment that should see him and his ship injected into the bloodstream of a laboratory rabbit. Instead, thanks to some industrial espionage gone badly wrong, he finds himself inside hypochondriac no-hoper Jack Putter (Martin Short). Aided by Pendleton’s ex-girlfriend, journalist Lydia Maxwell (Meg Ryan), and guided from within by Pendleton himself, Putter must overcome his inhibitions, thwart the villains and recover the microchip necessary to extract the ship before Pendleton’s oxygen runs out.

Steven Spielberg virtually owned the 1980s, and as executive producer added a tenuous sort of clout to several films in which he had no real involvement. Innerspace was one such production, its title invariably being sandwiched between the words “Steven Spielberg presents” and “a Joe Dante film” (this combination having in 1984 brought Gremlins to the cinema and thus being judged likely to wow prospective viewers into the right frame of mind). But Innerspace was no Close Encounters of the Third Kind (1977), Raiders of the Lost Ark (1981) or E.T. the Extra-Terrestrial (1982). It was, rather, an unabashedly silly reworking of Fantastic Voyage (1966), the cold war SF-adventure that provided Raquel Welch with her breakout role and by way of its novelisation added considerably to Isaac Asimov’s renown. Although Asimov did his best to make the written version more palatable, Fantastic Voyage sacrificed science for adventure and presented audiences with several indigestible, illogical dollops of plot tripe. Innerspace proved equally loose in favouring comedy over accuracy, and despite winning an Academy Award for Best Visual Effects – the internal landscape of Putter’s body is impressively realised – clearly made no effort at all to keep the scale of miniaturisation either believable or consistent. (Hence, in accordance with industry standards for advertising, the tagline: “An Adventure of Incredible Proportions”.) But this should come as no surprise; after all, the entire movie is a paean to the culture, filmmaking and associated extravagances in kitsch of the 1980s, where over-quirky meets over-the-top and the minor characters are served up as a layered profiterole cake of coiffured oddballs. Fans of The Blues Brothers (1980) may take some heart in seeing Henry Gibson (Nazi leader) cast here as Putter’s affably anxious boss, but whereas there was a dreamlike quality in the Illinois Nazis having driven past the back-flipping Bluesmobile and off an unfinished highway ramp, thence to fall over a hundred storeys and land directly in front of that same speeding Bluesmobile, the incongruity throughout Innerspace tends more towards that of an overt, in-your-face surrealistic slap. Recently contemporaneous comedies such as Ferris Bueller’s Day Off (1986) and Running Scared (1986) had shown what could be achieved by injecting a measure of absurdity into real character types, but Innerspace writers Jeffrey Boam and Chip Proser clearly missed this point and instead merely jabbed themselves, their butterfingers ensuring that the inherent craziness of the film becomes blurred, rather than put into sharp focus, by an extraneous excess of background weirdness. This may have been less evident to moviegoers at the time – there still being, needless to say, Martin Short jangling prominently in the foreground – but it is jarring in retrospect, and becoming more and more so as the eighties continue to recede, the perky novelty of the decade fading away amidst a Cyndi Lauper-load of bangles, leg warmers and erupting hairstyles into the nostalgic embarrassment of history.

By 1987 Martin Short already was familiar to television audiences as a performer on seasons 4–5 (1982–1983) of Canadian sketch comedy programme SCTV and season 10 (1984–1985) of America’s Saturday Night Live. His big screen breakthrough had come in 1986 alongside Steve Martin and Chevy Chase in ¡Three Amigos! while an effortless penchant for physical humour and a seemingly endless supply of woebegone expressions would later see him teamed up with Nick Nolte in Three Fugitives (1989) and then Danny Glover in Pure Luck (1991), the spirit of the times being to cast Short several times over as the hapless victim of some great cosmic irony. Innerspace, however, was very much his film and his alone, and all things told he succeeds quite splendiferously in carrying it along. The persona of Jack Putter has been scripted with a heavy hand, established only in broad caricature and then prodded to walk jerky steps along the plank and dive off into an ungainly character arc, while the plot map bears evidence of that same hand carefully marking out big Xs in crayon. Dennis Quaid’s Tuck Pendleton is not merely a ne’er-do-well, roguish stereotype, but in fact a shameless attempt at reprising (in all but name) Harrison Ford’s Han Solo (in fact, the Pendleton-Putter-Maxwell love triangle is so manifestly the same as that of Solo-Skywalker-Leia that one wonders if even today the writers are washing off stains from the carbon paper). The movie is overly manipulative in its music (Jerry Goldsmith), underwhelming in its attempts to build tension, and then again over-reliant for its impact on peak moments rather than sustained, coherent storytelling. But what moments they are: pratfalls and injuries à la Short; madcap stunts sans modern effects but heavy on flailing, panicking, Chaplinesque Short; facial transmogrifications that if played out in the political arena would have seen a Martin Short puppet battling to exorcise itself on British satire show Spitting Image; and, of course, the Jack Putter dance – that iconic, joyous, elastically uninhibited flailing about and letting loose of the inner hallelujah, Short’s comedic chutzpah burning as red-hot-poker-bright behind retinas today as it did back in 1987, and indeed having gained some extra kudos along the way through dint of blueprinting a few of Mike Myers’ moves in Austin Powers: International Man of Mystery (1997). This, in short (ha!), is Martin Short in his finest hour (and fifty-five minutes), and his performance is enough to make something eighties-memorable out of what otherwise would have been merely an over-long piece of second-rate children’s television.

Prior to Innerspace, Dennis Quaid featured in paranormal thriller Dreamscape (1984) and SF drama Enemy Mine (1985). Kevin McCarthy (head villain) had starred in SF classic Invasion of the Body Snatchers (1956). Vernon Wells (psychotic henchman) played in the post-apocalyptic Mad Max 2 (1981), while Wendy Schaal (disinterested second love interest) survived an Alien-spawned turkey, Creature (1985). Robert Picardo (ostentatious latin cowboy) had a minor role in Ridley Scott’s dark fairy-tale Legend (1985), as did William Schallert (confounded scientist) in SF thriller Colossus: the Forbin Project (1970). Even William Bean (Lydia’s editor) had warbled his epiglottis in the waters of fantasy, voicing Bilbo Baggins in an animated version of The Hobbit (1977). Nor were writers Jeffrey Boam and Chip Proser entirely without spec-fic experience, the former having adapted Stephen King’s The Dead Zone (1983) and the latter having co-scripted Iceman (1984). Cinematographer Andrew Laszlo had worked on horror movie Poltergeist II: The Other Side (1986), as had composer Jerry Goldsmith, who also scored dystopian classic Logan’s Run (1976) and SF horror masterpiece Alien (1979), among many others. But, of course, none of that made a scrap of difference to Innerspace, which remained steadfastly a comedy, its science fiction elements having little raison d’être beyond providing an idiosyncratic vehicle by which to convey Martin Short’s virtuoso performance to the silver screen. Yes, the bunny rabbit schematic is a nice touch, but when the history books are written Innerspace might just warp blithely past the SF chroniclers and instead stooge its way into the tome dealing with humour, banging heads with the silent comics and going, “Nyuk-nyuk-nyuk!” as the first film ever to deliver a poke in the eye from the inside.
Posted by Stephen Theaker