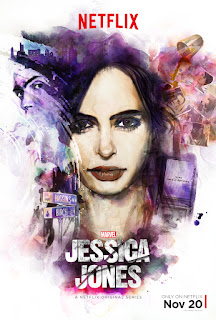 Jessica Jones is a private eye, and she’s down on her luck, doing jobs for a shady lawyer that don’t always bring out her best side. Traumatised by having fallen under the mental control of a powerful psychic for a long period, and the things he forced her to do during that time, she’s drinking too much and not looking after herself. She has a couple of things going for her: superstrength (though no more invulnerability than is required to punch people very hard without breaking your own arm) and a good friend, former child star Patsy Walker. (Their friendship and its history is one of my favourite things about the programme.) Sadly, we’re not joining Jessica at the point where things start to pick up for her. She does meet a new guy, Luke Cage, who seems able to deal with the worst drunks in Hell’s Kitchen without taking a scratch, but it’s not one of those relationships built on mutual trust, at least at first. And she’s beginning to think that Kilgrave, her psychic tormentor, might be back, and it’s impossible to make anyone believe her when he can just order people to forget that they’ve ever seen him. He is back (and played with a gleefully childish lack of conscience by David Tennant), and he’s going to cause a lot of trouble before the thirteen-episode series is over.

Jessica is played by Krysten Ritter, from Don’t Trust the B– in Apartment 23 and Veronica Mars (fans of that show may also enjoy this darker take on the same genre). It’s not the most obvious casting, since she’s best known for comedy, but she’s very good, conveying all the moods and troubles of her character perfectly. Everyone in the programme is equally well cast, and it’s well directed, and always interesting. Overall, I enjoyed it, but it drove me up the wall, the longer it went on. Some people might see the problems I had with it as nitpicking, but to me they were fundamental flaws. Jessica and her friends are trying to defeat an enemy who can order anyone to follow his instructions, but they don’t use earplugs, they don’t wear noise-cancelling headphones, they don’t do any of the perfectly obvious things you would do to cope with someone who has those powers. And they can’t convince anyone to believe he has powers, even though SHIELD, at the very least, know of an Asgardian with the same gimmick, and everyone would know about the superpowers of Thor and the Hulk. It might have been better if Kilgrave and his powers had been brought to the fore a bit later in the series, coming in for the finale rather than being the main antagonist for the whole thing, because, much as I like David Tennant and love his portrayal of this repellent character, his powers don’t stand up to twelve hours of scrutiny – even if the show does find interesting ways to use them. I’m looking forward to season two, though. ***
Posted by Stephen Theaker