Murder on the Einstein Express and Other Stories, by Harun Šiljak (Springer Science and Fiction) | review by Stephen Theaker 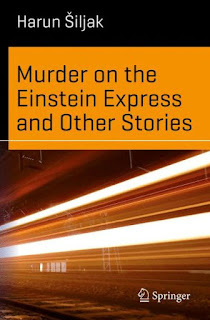 This title is part of a range intended to bring science and fiction together, which has familiar sf names Gregory Benford and Rudy Rucker on the editorial board. Their ethos is highly appealing: “Authored by practicing scientists as well as writers of hard science fiction, these books explore and exploit the borderlands beteen accepted science and its fictional counterpart.” Unfortunately this book, a short collection of four stories – “Normed Trek”, “Cantor Trilogy”, “In Search of Future Time” and “Murder on the Einstein Express” – doesn’t seem to have been copy edited or proofread. Articles definite and otherwise are frequently absent and tenses are often wobbly, making it a trial to read. If it hadn’t have been short enough to read in a couple of hours I would have given up on it. The author is clearly very clever and an expert in his field, but he is trying to get across ideas that would at times be very difficult for the general reader to follow in even the clearest prose, and that isn’t what we get. Not infrequently I was enlightened more by Kindle’s lookup feature providing the appropriate Wikipedia page (e.g. for the Monty Hall problem) than by the explanations in the book itself. As for the stories themselves: I understood very little of “Normed Trek”, but mathematicians may enjoy puzzling out its functions. “Cantor Trilogy” imagines a future where computers take over the writing and peer-reviewing of academic articles. I stumbled through “In Search of Future Time” without really understanding much more than that it seemed to concern the Turing Test. And “Murder on the Einstein Express” uses an extremely thin fictional frame to support a socratic canter through various thought experiments and puzzles. The author seems to acknowledge the book’s flaws in this story, joking that “criticism of the author’s literary style is strictly forbidden”, and having a character say: “I have always enjoyed writing. The fact that I am not good at it couldn’t stop me, since I had the will and thought it’s enough.” Stephen Theaker *
Posted by Stephen Theaker