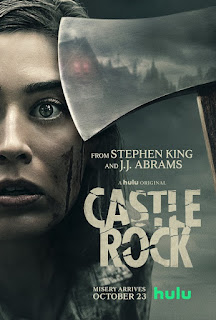 Season one of Castle Rock was one of my favourite shows of 2019. It told the story of a weird young man found in a prison basement, whose presence distorted the world around him. Though it ended with hints that we might next be taken to the Overlook Hotel, season two instead puts a thirty-something Annie Wilkes, travelling under an assumed name with her daughter Joy, in the town of Jerusalem’s Lot.

It gets off to a cracking start. Lizzy Caplan is brilliant as Annie Wilkes, desperate to get hold of anti-psychotics to keep herself on track, and you haven’t lived till you’ve seen what she can do with an ice scream scoop. The story could easily have been mistaken for a new season of Fargo, with the various members of a local family fighting over property and money. The supernatural elements, as they creep in, do not let it down at all. Tim Robbins plays Pop Merrill, while Paul Sparks is chilling as his son “Ace” Merrill – the bully from Stand By Me. Oscar-winner Barkhad Abdi and Yusra Warsama are also very good as Pop’s adopted Somalian children.

The one real problem I had was that some episodes (but not all, so it wasn’t a deliberate artistic choice) were missing the subtitles for their Somalian dialogue. The same problem happened with an episode that had lengthy sections in French, but in that case I was at least able to pause the programme and translate. (We were watching via the Starzplay channel on Amazon Prime Video.)

It feels more like a traditional Stephen King mini-series than season one, and I don’t mean that in a bad way. The first is weird and disorientating, the second has more action and more explicit ties to Stephen King’s work, and both are smashing in their own way. The only disappointment is knowing that we probably won’t see any of these characters again in season three.

And we did get to visit the Overlook Hotel in Doctor Sleep, the director’s cut of which was like the most expensive mini-series ever made. We also loved season one of The Outsider and enjoyed Mr Mercedes too, even if the villain of that one was essentially someone who had re-invented the Phillips Pronto. I saw someone joke recently about setting up a Stephen King television channel. I’d subscribe to any channel necessary to get season three of Castle Rock. Stephen Theaker ****