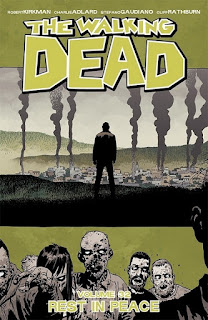 And so this astonishing comic comes to an end, having inspired multiple hit games and tv shows, and no doubt hit films to come. It is a difficult to discuss the content of the book, since pretty much anything I could say – including the names of the characters involved in it – would be a spoiler for the previous thirty-one volumes and their constant twists and turns. Even knowing that it is the last book is a mild spoiler, given that when the final issue was published, no one knew it was all over till they read it. Essentially, though, this book is about a possible civil war in the largest settlement we’ve seen to date, and then we get a lengthy epilogue showing what the future holds for the survivors. I found it to be a satisfying and moving end to the saga.

Did it run out of steam towards the end? Well, perhaps a bit in previous volumes, but it had travelled a long way before that happened, and it maintained its integrity throughout. It’s almost Racinian how all thirty-two volumes flow from that one source: the dead came back to life, tried to eat us, and some of us survived. It’s not an original premise but it stuck to it, resisting the impulse to add demons, vampires, werewolves, ghosts or aliens, and in the Governor, Negan and Alpha creating three of the best villains comics have ever seen. The one thing that always bothered me a bit is that the survivors never set up abbatoirs to deal with the dead, but I suppose that wouldn’t have been as dramatic as the hand to hand fighting.

There’s no doubt I’ll be reading it all the way through again. Stephen Theaker *****