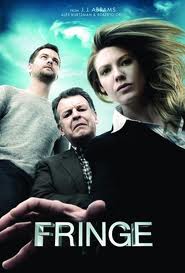 The premise: Olivia Dunham is an FBI agent who investigates strange events with the help of addle-pated scientist Walter Bishop and his estranged son Peter. As you might expect, the strange events turn out to be connected.

Fringe begins well, with a very good pilot. The budget is huge, there’s lots going on, and it all looks astonishingly lovely. Going on the evidence here, there’s nowhere in the world so lovely as Boston under snow. Subsequent episodes, though, have tended to be ever so slightly boring. Crucially, there are about twenty minutes in the middle of every episode where they get bogged down in some ludicrous experiment; that’s the twenty minutes that would be spent running around fighting monsters in The X-Files or Supernatural.

But all it would take to fix that problem would be one good script. Fringe’s bigger problem lies in its characters and their dynamics.

John Noble, as Walter Bishop, would be the best reason to watch the programme at the moment if it wasn’t so frustrating to spend half the episode stuck in the laboratory with him. He’s funny, annoying and driven, and if you’ve ever rued the fact that an older actor is unlikely to play the Doctor in the current series, you’ll enjoy this performance.

Olivia begins well, as a very strong (if somewhat irrational) character, but tails off quickly, and by episode five is asking some truly idiotic expositionary questions.

The bigger problem, though, is that they desperately need to give Joshua Jackson (as Peter) something to do. Ever since Dawson’s Creek it’s been clear that he’s a charismatic actor with a lot of potential. Fringe needs to give him a gun and let him be a protagonist – let him be a man instead of just his dad’s son. At the moment the male lead is a moaner and a follower, and they need to change that. Hopefully episode four, though not a great episode in itself, marked something of a turning point in that regard.

What you have here is pretty much the Hartnell Doctor with Ian and Barbara. But the Doctor can’t leave the Tardis, Chesterton has to babysit him there and doesn’t get to beat anyone up, and Barbara goes off on her own into adventures for which she’s rather ill-equipped.

Fringe is also reminiscent of more recent Doctor Who – Walter Bishop, like the seventh and tenth Doctors, already knows everything about every problem they encounter. In Doctor Who that’s a shortcut to get the action moving, but in Fringe half of each episode is spent waiting for Bishop to remember the things he already knows; solving the case is just a matter of waiting for him to recall his original research. They can’t keep doing that for long before it becomes very annoying.

One other problem is that the music needs to be toned down. At the moment the drama of every scene is amped up ridiculously by the soundtrack, leaving you too often with the feeling that something exciting is going to happen, and an entirely unnecessary sense of disappointment when it doesn’t.

J.J. Abrams’ name is the one being used to sell the programme, but it’s just as interesting to see Darin Morgan, an X-Files graduate, turn up in the credits. Like Supernatural, another programme providing a home for ex-X-Files staff, Fringe faces the challenge of finding fresh territory: the X-Files ran for nine seasons, there isn’t much it didn’t do. Supernatural has found its feet with a grand Moorcockian clash between law and chaos (and a good deal of humour, thanks to Ben Edlund), while Fringe’s fresh territory seems to be corporate villainy: in particular, what if Microsoft had technologies they weren’t telling us about? Not exactly thrilling stuff.

Fringe has been picked up for a full series, which is a good thing. It could easily have gone to the same early death as Threshold, another show that just couldn’t kick some bad habits, despite excellent production values, great behind-the-scenes pedigree and a strong cast. If Fringe continues to move in the right direction, it could be a great show, but for now it’s just a very pretty one. The snow in this programme is second-to-none!