The Age of Chaos: the Multiverse of Michael Moorcock, by Jeff Gardiner – reviewed 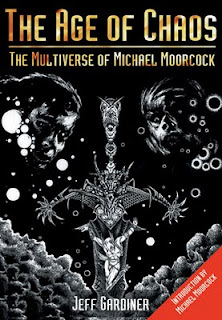 This is a well-written overview of Michael Moorcock’s complete works, published by the British Fantasy Society with an introduction by Moorcock himself. Moorcock has written hundreds of books, so covering them all in under 120pp is obviously going to leave some underserved. Although the chapters on Moorcock’s early and later periods are detailed and fascinating, the heroic fantasy for which he’s still best known gets extremely short shrift (quite oddly, given the publisher), being crammed into one nine-page chapter. There’s little room for anything more than brief summaries of Elric, Hawkmoon, Corum and the rest. The complete chapter given over to Gloriana, in contrast, seems extremely generous.

Nevertheless, this is an ideal book for anyone looking to get a quick critical grasp on Moorcock. The lack of footnotes may limit its academic usefulness, but a useful reading list is provided. The discussion of Behold the Man contains a couple of odd comments (apparently “Moorcock does not deny the truth of the crucifixion”) but is still very illuminating.

It was a perfect book for me: in my twenties I read everything I could that Moorcock had published up till then; now a new pile of his books has accumulated and I find myself a little daunted. Reading The Age of Chaos has left me primed to have a crack at the pile; recurring themes, characters and in-jokes have been dislodged from my memories and reactivated.

On the other hand, will that help me enjoy Moorcock’s new books? It’s the critic’s job to trace the connections between an author’s various works, to identify the themes and preoccupations, and Gardiner does an excellent job of that. But these books are already awfully interconnected; they lock together like chainmail. By stressing the connections this book gives an impression of sameiness and repetition.

But maybe it’s just me, an impression I was left with after reading far too many of them all at once a long time ago, an impression revived by this book, but not derived from it.

After all, reading Gardiner’s description of The City in the Autumn Stars, I didn’t recognise a thing: my overwhelming memory is of thinking, right, there’s Tanelorn, there’s Jerry, there’s Von Bek, and so on. Gardiner’s account has tempted me to re-read it: it’s entirely possible that I read it as a fan, looking for the things that fans look out for, rather than paying attention to everything that was new.

Still, I’m probably not alone in thinking Moorcock’s books would benefit from being pushed apart a little bit. When I first read most of them they were short, easily digestible books. Then some began to be collected in omnibuses. And then they were all gathered together into a fourteen-volume series of gigantic paperbacks. While I appreciated the value for money, it felt as if they were being drawn closer and closer together, like the stars at the end of the universe.

The Knight of the Swords, The King of the Swords, The Sword and the Stallion and The Hollow Lands were all winners of BFAs for best novel, but now they are permanently reduced to chunks of larger volumes. Even an important literary novel of ordinary length like A Cure for Cancer is only available as part of an omnibus, which is utter madness. (Shouldn’t it be a Penguin Modern Classic by now?) These books could really do with being treated as individuals again, given some room to develop separate identities. Maybe if ebooks take off and economies of scale stop being so all-important, that will happen.

The Age of Chaos: the Multiverse of Michael Moorcock, by Jeff Gardiner. BFS Publications, pb, 120pp (2002).
Posted by Stephen Theaker