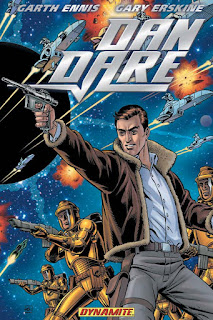 Rather than a reboot or a re-imagining, Dan Dare (Dynamite, ebook, 198pp), by Garth Ennis and Gary Erskine, is a sequel in seven chapters to the original adventures of Frank Hampson’s Eagle character. Dare has retired to a virtual country village on a piece of class six spatial debris (asteroid #2333419, to be precise). His peace won’t last. Old friends like Digby miss him, and soon they’ll need him. Professor Peabody is Home Secretary, working for a Prime Minister with echoes of Blair (based in Millbank, “he’s been in too long … he’s shrugged off too much bloody wrongdoing”) who took charge of the world after the USA and China blew each other to bits. There are treens on the western approaches of the solar system, and they’ve brought two devastating weapons with them: a black hole, and the malign intelligence of the Mekon.

Garth Ennis explains in an introduction that his first Dan Dare was the one in 2000AD (as it was for me, by way of the wonderful 2000AD Quiz Book, which also introduced me to everything from The Quatermass Experiment to The Thing from Another World). My Dan Dare was the great-great-great-grandson of the original, who starred in the resurrected Eagle, though I’ve since read the originals. The Dare of this comic lacks the elegance and charm that characterised the two Eagle characters. He cares about whether the prime minister should resign, he’s run away from a world that could really have used his help, he’s gone years without seeing his friends, he’s surly and judgemental, with not an ounce of dash. On paper Ennis would have seemed the ideal writer for this project, honour and duty being such important themes in his work, but he just doesn’t click with Dare.

Elegance is also lacking from the artwork by Gary Erskine. His spaceships, treens and Mekon are excellent, but the humans often seem awkward, perhaps because of his use of photo reference; it might be unfair, but I think humans drawn in the correct proportions don’t always look quite right in comics. Dare and “Blair” are barely distinguishable in certain panels. I liked his artwork on The Filth, where the protagonist is not really heroic, but his Dan Dare never looked quite right, and a preponderance of close-ups left me hankering for the epic look of stories from the fifties and eighties. Overall, this didn’t feel, to me, like Dan Dare. A major character’s death contributes to that sense, making it unlikely that future stories will reference this one. It is a good space adventure, a decent read, but it has the taste of a licensed product, not the real thing.
Posted by Stephen Theaker