The White City by Elizabeth Bear – reviewed by Stephen Theaker 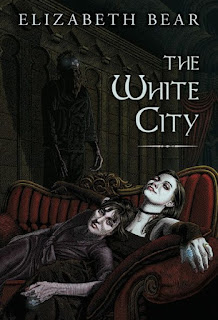 The White City by Elizabeth Bear (Subterranean Press, ebook, 1669ll, originally published in 2010) stars Sebastien de Ulloa. Though that’s just one of many names used by this “wampyr, hobbyist detective, peculiar old soul”, it’s the one he’s using in 1903, at the time of this trip to Moscow. He is travelling with what we are told is an unusually small court: “lady novelist” Mrs Phoebe Smith and “forensic sorcerer” Lady Abigail Irene Garrett Th.D. (Abby Irene for short). There is a murder in a house where he was planning to feed, quite consensually, on Irina Stephanova, an old friend; though he is found on the scene by police, suspicion gives way to his reputation as “The Great Detective” and he and Abby are enlisted in the search for the murderer. A second strand describes events six years earlier in the same city, where Jack Priest, a young member of Sebastien’s court who has since been killed, gets involved with Irina and the circle of artists among which she moves; again, there is a murder.

It’s a book of nice detail and careful thought. For example, Sebastien was once considered tall, but thanks to improvements in food and health since he turned he’s now just above average. In another scene Jack notes the dangerously splintered ice on the floor, deducing that the “topmost layer had frozen first and been shattered by hooves”. There are intriguing allusions to a changed world history: the American War of Independence seems to be going still, or has begun late, while in Russia the “Imperial Sorcerers united with democratic revolutionaries to overthrow Ivana II in 1726”. Jack is just sixteen years old, but wants to show he’s old enough to be a full member of Sebastien’s court; there’s a painful irony in his efforts, since we know he will die when still very young.

As you can tell from this issue’s book reviews [TQF42], I bought a number of these Subterranean Press ebook novellas at once: I didn’t pay much attention to what they were about. Upon realising this was a vampire tale, I may have grimaced a little. Though not entirely sick of the genre, I’m in no rush to buy more – but any preconceptions were quickly scattered: this is one of the better, more intelligent vampire stories I’ve read. The Russian setting, and the bars full of artists, nihilists and revolutionaries it provides, is a fascinating place to visit, and the book’s theme provides its protagonists with original motivations: the persistence of art, how much that might mean to beings destined to outlive the people they love, and, conversely, how the carefully-constructed and self-protective emotional disengagement of these vampires affects the people who come to love them.
Posted by Stephen Theaker