Moscow But Dreaming by Ekaterina Sedia – reviewed by Stephen Theaker 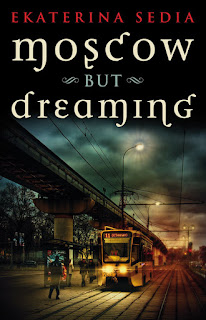 The recurring themes of Moscow But Dreaming (Prime Books, pb, 286pp) by Ekaterina Sedia are not happy ones. These are stories of drudgery, degradation and misery, of people with nothing to live for, and women worn away to nothing, like the ghosts of murdered young women in “Tin Cans”, or the unnamed protagonist of “Zombie Lenin”, numbed by misery, followed by a zombie Lenin since she was a little girl, and institutionalised for talking about it, or the protagonist of “Citizen Komarova Finds Love”, an aristocrat before the Russian Revolution, who now works in a consignment shop in the town of N. and gets involved with a cavalryman. “With him, he brought the cutting wind and the sense of great desolation”, not to mention a horse’s leg in a burlap sack, but compared to most men we meet in this book he’s George Clooney carrying a Marks & Spencer’s ready meal for two.

With such imagination and skill that it’s a pleasure to read despite the grim subject matter, the book catalogues the cruel ways in which women are disappointed, exploited and betrayed. In “Chapaev and the Coconut Girl” we learn the legend of the Coconut Girl, who pooped out lots of lovely gifts and was then murdered by villagers who resented the gratitude they owed her. In “Seas of the World” a husband tells a child a secret that breaks the mother’s heart. “Ebb and Flow” is a myth to explain the tides, as the story of Persephone explains the seasons: the daughter of the Sea kami Watatsumi begs husband Hoori not to look at her during childbirth, and of course he does. “The only happy stories you will ever hear are told by men”, she tells us. In “Kikimora” a young woman must sacrifice her own life, one that's just beginning, to bring life back to the city. In “Munashe and the Spirits”, Munashe hasn’t looked after his mother well, and she dies. Unlike many men here, he gets to (and wants to) make amends. Spirited off to wash a female being’s sore back, he is given a way back home.

Upon his return Munashe meets two abandoned, starving children, and neglected and orphaned children appear here frequently. In “There is a Monster Under Helen’s Bed” a little girl adopted from an orphanage is severely wounded by said monster; her new parents will be blamed. A girl is assaulted in “You Dream”; a boy intervenes with horrible consequences. “A Play for a Boy and Sock Puppets” features a sock puppet used in a centre for autistic children; after seeing the children mistreated, the glove escapes to find one of them in the outside world. The kikimora of “One, Two, Three” is turned into a wretched human child by an unhappy childless couple who catch it and cut off its hair. In “A Handsome Fellow” Svetlana (her beauty “heightened by hunger”) tries to keep brother Vanya and sister Yasha alive during the siege of Leningrad, but in her desperation takes help from the wrong man.

Other stories are less easy to categorise, but show Sedia’s range and invention. “The Bank of Burkina Faso” features one of the book’s best and most amusing ideas: two apparent spammers really do have money stuck in the mysterious bank of Burkina Faso, and they really do need a foreigner’s help to access it. “A Short Encyclopedia of Lunar Seas” is a quirky riff on the names of the lunar “seas”. In “Yakov and the Crows” an office worker feeds the crows that gather outside his window; other workers begin to poison them. The narrator of “By the Liter” discovers that booze left next to a corpse absorbs the deceased’s memories, and becomes addicted to the secondhand experiences. “Cherrystone and Shards of Ice” is set in a city where the dead live on in deaders’ town, where they struggle to stay cool to slow their decomposition. Like many men in these stories, protagonist Lonagan hurts a girl, albeit inadvertently: a deader who bangs her head, accelerating her decay.

“I feel my cheeks burning as if from a slap. How I hate that word, exotic. How I loathe it, how stupid I feel not to have realized until now that he spoke to me because I was exotic too, a bored quest for novel experiences with a minimum of investment and always at someone else’s expense.” After reading that passage on the exotic in “Chapaev and the Coconut Girl”, one would be wary of laying too much stress on that forming part of the book’s interest. Its (mostly) Russian settings and the unfamiliar (to this reader, at least) types of characters it portrays undoubtedly provide it with a degree of novelty, but the book’s interest comes as much from each story’s determination to stimulate: to express powerful emotions, to examine different lives, to understand how people manage to keep on living in the worst of circumstances, and in some cases why they don’t. It’s a book of clever, insightful stories about miserable people.
Posted by Stephen Theaker