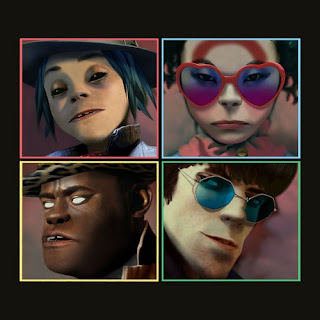 The Gorillaz have produced a series of innovative, experimental and listener-friendly albums, and being cartoon characters has undoubtedly helped, freeing them from many of the expectations and audience-imposed boundaries that often plague bands. Think of the pushback to Radiohead going electronic on Kid A or to David Bowie dabbling in jungle on the underrated Earthling. All we expect from Gorillaz is that they will give us something new every time – new collaborators, new sounds, new approaches – and that’s exactly what we get from them on Humanz. It’s like a top twenty from the future, a stylish album that in its variety sounds to me like a tenth generation descendant of the Beatmasters’ Anywayawanna (someone reissue that, please!), especially on tracks like Sex Murder Party, combined with a techno crispness that reminded me of Inner City’s marvellous debut album, all those years ago. There are twenty-six tracks in total, although seven are (brief) interludes. Highlights include “Momentz” featuring a turbo-charged De La Soul, “Ascension”, with an angry Vince Staples, and “Charger”, in which Grace Jones slowly uncurls, regal, like an aural version of the Alien queen. “Provocative!” It’s a joy that this song exists in the world. Apparently Grace Jones was in the studio for hours improvising her lyrics, and if there’s a four hour version of this track I’d love to hear it. It also features 2D at his most delightfully feeble. Conversely, “Andromeda” features one of 2D’s strongest vocal performances, on a track that could almost have been drawn from the Pet Shop Boys’ sleek and groovy work with Stuart Price. “Submission” contrasts Kelela’s gorgeous vocals with Danny Brown’s hyperactive cartoon rap in a way that seems inexplicably perfect. “We Got the Power” is bottled inspiration, just when we all need it. The deluxe edition (surely the version most people will want) adds six tracks (one of them an interlude) to the twenty on the standard version, including another of the very best songs, “Out of Body”, a herky-jerky dance number featuring Kilo Kish. The album is unpredictable but consistent, every song a novelty, full of weird noises and unexpected movements, with a multiplicity of voices woven into a whole by virtue of a consistently funky, tight sound. ****
Posted by Stephen Theaker