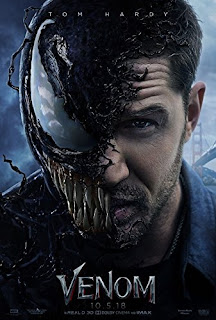 The alien Venom has a tar-like muscular body, humongous jaws, and a tongue that would put Gene Simmons to shame. One would think that Sony Pictures would be foolish to launch its Marvel Universe with such a character, who seems better suited as a Scooby Doo villain. Not so fast.

Rather than settling on a one-dimensional action film star, Sony gives the role to Oscar-nominated method actor Tom Hardy. And instead of wallowing in apocalyptic solemnity, the film embraces its own ridiculousness. The result is that Venom, directed by Ruben Fleischer, delivers an amusing story that combines a picturesque setting (San Francisco), heart-pounding action (with lots of explosions!), and a likable protagonist strengthened by Hardy’s commitment to character.

Disgraced investigative reporter Eddie Brock (Hardy) discovers that wildly successful entrepreneur (and psychopath) Carlton Drake (Riz Ahmed) is using the disadvantaged to carry out biomedical research. Drake wants to find suitable human hosts for the amorphous blobs called “symbiotes” that his company Life Foundation has harvested from another planet. Unfortunately, symbiotes are picky, and if the match isn’t right, the prospective host dies. Eddie happens to be a perfect match for the symbiote Venom (voiced by Hardy). When Riot, another symbiote in Drake’s collection, decides to take over the earth, Eddie and Venom must stop him.

One of the most entertaining aspects of Venom is Eddie’s reaction to the gradual revelation that the alien has “infected” him. Venom first reveals himself as a disembodied voice, which leads to plenty of jittery confusion on Eddie’s part. Hardy’s physicality and facial expressions make his reactions believable. Watch for the restaurant scene in which a ravenous Eddie reaches the peak of his distress about his “parasite” – a word that Venom hates.

Another refreshing aspect of the film is the normalcy of its protagonist. Viewers identify with Eddie because he’s an ordinary guy in extraordinary circumstances.

The contrast between Venom’s deep, diabolical voice and his colloquial dialogue heightens the film’s humour. Venom speaks casually about his dietary preferences (humans, that is) and even taunts Eddie when the latter refuses to jump out a window.

It’s a pleasure to watch the tenuous relationship between Eddie and Venom develop. “On my planet I was a loser like you,” says Venom. People love to root for losers – how much better when there are two of them! – Douglas J. Ogurek ****