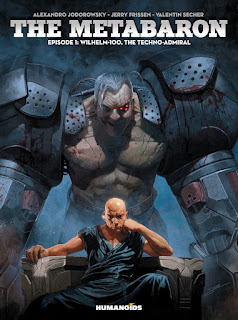 The first of eight volumes, with a story by original Incal writer Jodorowsky, written by Jerry Frissen, translated by Quinn and Katia Donoghue, and then given a polish by Hardware director Richard Stanley. A lot of writers involved but they don’t spoil the metabroth. The first four pages suggest that events won’t go terribly well for our hero, before the book shows us how it all began. The Metabaron, coolest character in the first Incal saga, has pledged to kill no more, and for months has stayed in his quarters. He doesn’t eat, sleep, drink or presumably go to the toilet. But eventually his spaceship, the metabunker, requires a replenishment of its fuel, epyphite, currently being mined by slaves on the Metabaron’s home planet of Marmola. This will it seems bring the Metabaron into conflict with the resurgent Techno-Techno Empire, its Technopope and Techno-Vatican, and its greatest Techno-Admiral, Wilhelm-100, whose giant robot arms, also powered by epyphite, can cut a man in half with a single blow. The overuse of techno as a prefix in this album becomes rather comical, but the story is played seriously, and although sexual assault is for once in a Humanoids book kept offstage the horrors inflicted on the losers in the techno-tussles are still extremely unpleasant. The villains are truly despicable, and one is left hoping that the Metabaron will abandon his vow sooner rather than later. As ever with Humanoids books, the artwork is stunning: detailed, full-colour and expressive. The volume is available on its own digitally, or together with volume two (The Anti-Baron) in an oversized deluxe hardback. ***
Posted by Stephen Theaker