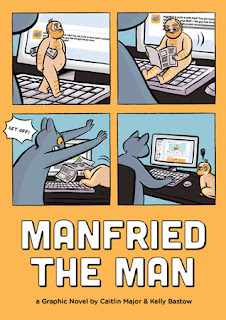 In a world where human-sized cats keep cat-sized men as pets, Steve the cat is struggling a bit. His home is a mess, he isn’t happy at his call centre job, his relationships with female felines are not purring at all, and his little man Manfried is lovable, but lazy, and doesn’t get on well with other little men. One day Steve leaves his window open and Manfried gets out. Steve’s life totally collapses, though maybe it’s necessary, since that’ll give him the chance to rebuild a better version. The relationship between Steve and Manfried is sweet, and Manfried is very cute, although the chubby little bearded fellow looks quite a lot like this reviewer so I would think that. Unlike him, I wear clothes, at least most of the day, and he looks very comical running around with his gentlemanly parts dangling around. There are no female pets in this book, and no reason is provided in the story; perhaps that’s being saved for the sequel, planned for 2019, or maybe it’s just that it would feel like a different kind of book with lots of naked women running around. The book defamiliarises our relationships with pets: it makes the reader consider just how similar our behaviour in that situation might be to theirs, how odd it is that people keep pets at all, and how much those animals mean to people, especially people who don’t have others to care for them. The cartooning is very cute, but never fails to provoke sympathy for Steve’s distress as his life goes terribly wrong, or little Manfried’s when he gets into a fix outside the house. ****
Posted by Stephen Theaker