Doctor Who: The Forbidden Time, by David Lock, read by Anneke Wills and Frazer Hines – reviewed 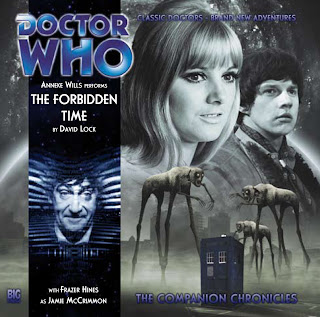 Many of the Companion Chronicles, being told retrospectively to an audience, provide a novel perspective on these characters and their travels in time. We’re not used to them growing old—or even growing up, given how young some of them were. The Forbidden Time plays this card with a flourish, present-day Polly (she mentions iPods) sounding almost mournful at times as she remembers her old friends, and the incidental music has the elegiac feel you might expect in the final scenes of a particularly moving film.

We’re used to the companions missing the Doctor himself, but this story makes the point that companions will miss each other too. Polly and Ben returned to sixties London, but Jamie ended up back in historical Scotland, so far away in the past that Polly couldn’t possibly ever see him again: this story really brings out the sadness of that knowledge.

A press conference provides the framing device, Polly explaining to a largely incredulous audience the significance of a telepathic broadcast received the world over, warning that everyone on Earth is moving into a period of time owned by the Vist, and will be expected to pay a toll—a portion of their lifespans!

As Polly explains, the Doctor, Jamie, Polly and Ben found themselves, shortly after the Doctor’s first regeneration, trapped in a subdued, sepia shadow in time left by our world. The difference between the two Doctors plays a part in the story, with the second being “much more likely to trust the people he was travelling with”, Polly notes.

Here they met the Vist, inhabitants of the time vortex, beings with the bodies of greyhounds, legs as long as a giraffe’s, and faces like a monkey’s; Polly compares them to a painting by Dali. They move in time as we move in space, but in the end, despite their natural abilities, they are not quite the equals of a Lord of Time, and they fall prey to one of the crafty tricks so typical of the second Doctor.

If the story has any flaws, they relate to the nature of its telling. The presence of a dictaphone-style device in the original adventure to record dialogue from Jamie and Polly feels a little contrived, and the climax of episode one is possibly the least exciting cliffhanger of all time, Polly suggesting to her audience that they should have a five minute break. A one-hour press conference explaining a global catastrophe would hardly test anyone’s patience.

But there’s an awful lot to love here. The warmth of the relationships comes through with almost every word; the characters really care about each other. There are some lovely details, such as the surprising reason for Ben’s ability to pinpoint their location in time. The reading, mostly by Anneke Wills, with short sections from Frazer Hines, is quite excellent, and one really does feel that a significant new chapter has been added to these characters’ lives.