Doctor Who: The Hounds of Artemis, by James Goss, read by Matt Smith and Clare Corbett – reviewed 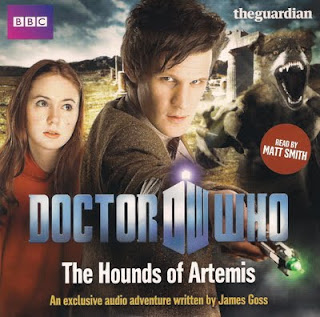 Eastern Turkey, 1929! And when the lost Tomb of Artemis is unsealed, what treasures are found within? The eleventh Doctor and Amy! Making their excuses and presenting themselves as emissaries from the Scarman Institute, they join an archaeological team on the verge of unleashing an ancient curse that is all too real.

We learn what happens along with Helen Stapleton, granddaughter of Bradley Stapleton, a junior member of the team who went on to great things. The Doctor has sent her a bundle of papers, combining his notes on the affair with the diary entries of Miss Amelia Pond; the former are read to us by Matt Smith, the latter by Clare Corbett, in her role as Helen.

It’s a bit of a shame that the diary entries aren’t read by Karen Gillan, but Corbett hits just the right note, and Matt Smith as ever is breathtakingly good as the Doctor; he shares Tom Baker’s knack for making the most eccentric line readings sound perfectly natural. Just listening to him read is a delight.

Like The Jade Pyramid and The Runaway Train, this story puts the Doctor and Amy in an interesting historical milieu, one familiar from fiction and films, but more or less new to the series. There are echoes of Tomb of the Cybermen, but despite a number of fatalities and much howling in the night the tone is generally jaunty and light-hearted.

It’s probably not the entity calling itself Artemis or its demonic hounds that will stick in the mind, but rather the incidentals of the story: the Doctor’s attempt to persuade Amy to join the digging (“Go away and let me diarize!”), Amy’s unpleasant experiences with a corset, and the Doctor’s need at one point to get his hands inside that corset.

Doctor Who: The Hounds of Artemis, by James Goss, read by Matt Smith and Clare Corbett. AudioGo, 1×CD, 70 mins.
Posted by Stephen Theaker