The Green Gods by Nathalie Henneberg – reviewed by Stephen Theaker 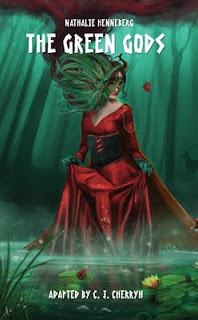 This peculiar, stately, romantic novel is set towards the end of Earth’s long isolation from the rest of human civilisation. Knowing that the impassible atmospheric barrier is beginning to weaken, and that the spaceships of humanity’s descendants will soon arrive, the floronic overlords of an increasingly moronic Earth decide to grasp the nettle – rather than extend it – and eliminate all remaining opposition to their rule.

Against this background brave Aran, the last bright hope for the humans of A-atlan, is to be mated with his beloved queen Atlena; the tradition is that once mated she kills him, and if she does not, the plants make sure he dies anyway. He is forced to leave the last city: he will gather the mutants at the gates and lead them like Elric against his home and the woman he loves.

The Green Gods was originally published in 1961 (C.J. Cherryh’s translation dates from 1980), but its tone anticipates the science fiction films of the late sixties and the seventies. It has the staginess, pomp and grand ideas of a Planet of the Apes or a Logan’s Run – and a dash of their scientific implausibility. It also resembles those films in its portrayal of a dashing hero set on smashing the system.

I haven’t had the opportunity to compare the translation with the original French, but it maintains both the elegance and the occasional impenetrability of that language. That isn’t helped by one problem with this edition as a whole: a handful of (I’d guess) scanning errors that aren’t so obviously wrong that you don’t spend a little while puzzling over them before moving on.

For example in “The Blind Pilot”, one of four bonus short stories provided in translations by Damon Knight, a disabled man is said in two places to move about upon his “carnage”, which I came to think must mean the remains of his legs. A third instance helpfully identified it as a carriage.

The four stories are all interesting, and show Henneberg to be a science fiction writer of some range – albeit one with little more than a slight interest in science – but it’s the novel readers will remember. Its world of cactus soldiers, gigantic underground orchids and bloated, malignant peyotls is the stuff of oppressive, overactive summer nightmares.