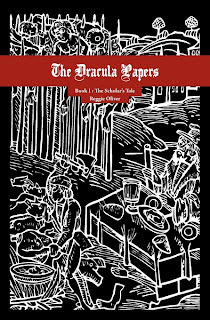 Tricky matters, they are: sequels, prequels, pastiches, hommages. Essentially, they depend upon two factors: that the original narrative is engaging and robust enough to withstand such re-visiting; and that the re-visitor is skilled enough to convince the reader that the enterprise was worth it. If anything, the second factor is rather more important. The literary landscape is strewn with, as it were, crushed light aircraft that have attempted to fly in the slipstream of the “master narrative”. There they lie, all the Sherlocks, feckless (and, actually, not that bright); the pantomime Crusoes; the ever more bestial Frankenstein monsters, each betraying more emphatically than the last that the re-writer has not grasped what Shelley’s original was really about.

And then there’s the Prince of Darkness – bloodied (always to his satisfaction) but unbowed after all the years. It could be argued that Dracula’s best re-visionists appeared early on – Nosferatu, the creations of Hammer in its pomp – and that, latterly, quality control has been removed. It has been argued that the likes of Twilight are actually updates of the 1950s “beach movie”, with fun and sun being replaced by dim alleys and forests, by leading fang-meisters designed to appeal to the Justin Bieber demographic. This reviewer couldn’t possibly comment.

Reggie Oliver’s interest is far removed from the above. Though supposedly presented to the public a little time after the events of Bram Stoker’s novel, The Dracula Papers purports to weave together “a number of documents … relating to the early history of the person whom we knew as Count Dracula”. Our guide in this matter, the weaver himself, is Dr Abraham van Helsing, whose Foreword comes to us across the years from University College, Oxford, December 1894. This alone reveals the breadth of the task that Oliver has set for himself: to establish factual credibility around the Papers themselves; to maintain tonal credibility in a narrative which will doubtless feature many characters; and to handle the Papers, and the history that flows from them, in a way that avoids parody on one hand and an uninspired plod through Stoker terrain on the other.

Other demands arise: van Helsing’s interest is particularly piqued by “the Memorial of Martin Bellorius (1553–1635), one of the most outstanding scholars of the Renaissance”, and it is this material that gives The Dracula Papers its narrative. Bellorius must develop into a fully-formed character; he must, of course, make a daunting journey – as he does, prompted by a mysterious letter which comes into his hand and leads to the events recounted in the Memorial; he must trust some characters, accidentally encounter others, gamble with his life when yet others make their dark moves; he must, given the figure at the heart of his quest, become embroiled in Gothic perils; he must dissect Transylvania, focusing on particular elements in its discomfiting history which will provide a… well, life-story is hardly the phrase, but a cogent, engrossing narrative of the being who now lurks, perhaps discontentedly, at the back of the Twilight sets. Aside from all that, Oliver has to invoke the linguistic tones and registers of the seventeenth century and earlier, feed them into Bellorius’s account and then, as it were, hand them on to van Helsing; the whole narrative cannot be levelled out in the voice of an Oxford scholar at the close of the Victorian era.

That Oliver manages all of the above with some brio is a testament to the novel’s plotting, to the period of time during which the idea presumably gestated in his mind and made its way through notes and first drafts to the book we now have – and to the enduring appeal of (or appalled fascination with) the Dracula tale itself. Oliver demonstrates a capacity to bowl his story along in a straight line; the book’s bulk is offset by his sprightly style. And he is to be commended for ringing changes in Bellorius’s character. Though appealing as a seeker, Bellorius is not without bumptiousness, a sense of self-importance reminiscent of Marlowe’s Faustus. At one point, he bestirs himself to confront the fiery, unpredictable Prince Vlad in a way that the latter’s character really doesn’t encourage:

“I had embarked on a mild but dignified remonstration when he suddenly stood up, eyes blazing with rage, a little pulse racing in his neck, left leg trembling. He shouted:
‘How dare you interrupt us, old pedant!’ Old! I was twenty-three at the time!” (p. 183)

As Dr van Helsing’s Epilogue informs us, Book 1: the Scholar’s Tale is the result of but one packet of documents that have come into his possession. The Doctor was inclined to destroy all of them, so shocking are their contents, but his hand was stayed by “my old and valued friend, Mr William Ewart Gladstone”. The real and the unreal, the known and the unimaginable, the touchable world and the halls of nightmare – these sit one on top of the other in this first part of The Dracula Papers, offering existence as a palimpsest, layers of words and action that can be peeled away to reveal… well, not the whole story of this most Undead of undead – yet. Oliver is working on packet two of van Helsing’s documents, intended to become The Monk’s Tale. It is to be hoped that his touch will remain as sure.—Michael W. Thomas