Her, reviewed by Jacob Edwards 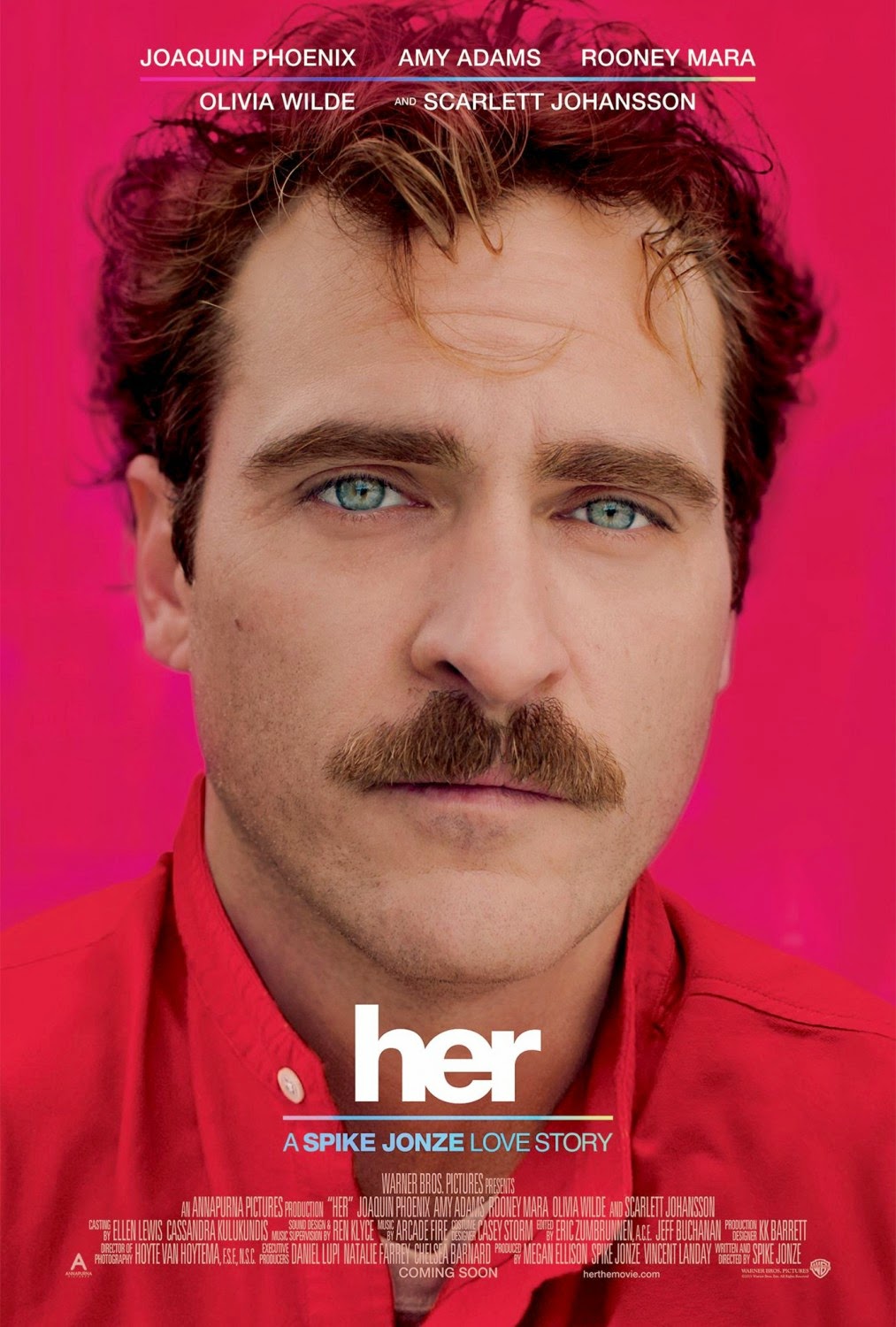 The Goodies episode “2001 and a bit” (1976) is perhaps the most fantastically offbeat of all the Goodies satires, extrapolating a violent yet progressive, absurdist future from the social mores and concerns of the mid-1970s. Each Goodie plays the lookalike son of one of the others – they were equally fond of Raquel (Welch, the picture from One Million Years B.C. would suggest), so when triplets came along they guessed and took one each – and in revealing whatever it was that became of Graeme, Tim confesses that, “He was put away for having an unnatural relationship [half-pause] with his computer.” Never mind that such an affair already had been the subject of “Women’s Lib” (1971), one memorable scene of which sees Graeme and his desk-sized desktop skipping hand-in-hand through the woods. In 1976 the idea still was ludicrous enough to power a good one-liner.

Fast-forward to the year 2013 (and a bit), and writer/director Spike Jonze has brought us Her – a movie in which the human/computer relationship is taken not as the subject of a throwaway guffaw or outlandish thought experiment, but rather as a foregone social trend whereby insular digital natives such as Theodore Twombly (Joaquin Phoenix) quite naturally will bond and form intimate relationships with their AIs. The computer romance idea is by no means new to cinema – nearly thirty years have passed since Electric Dreams (1984) had its fling with the silver screen – but Jonze’s take is both disquietingly stark and unnervingly serious (notwithstanding that a few uneasy chuckles served somehow to earn the film two spurious Golden Globe nominations in the comedy genre). Her, as the title might suggest, is no mere conceit around which to structure a plot, but rather a reasoned, often uncomfortable extrapolation wherein the once-unimaginable has become an acceptable and inevitable reality, burgeoning yet manifest, from which necessarily there must be both repercussions to face and truths to learn. What is human? What is love? Samantha (voiced by Scarlett Johansson) is in many ways no less real to the audience than is the metrosexually liberated Twombly with his Tom Selleck throwback moustache and his unselfconscious inversion of the seventies swinger lifestyle. Samantha does not exist to drive the narrative; she is the central yet unseen feature around which it flows. As both Twombly and the audience project onto her their expectations, desires and ideals, well might there be some deeper truth lurking beneath the revelation that, beyond the fleeting yet ultimately intangible bond of interaction, we don’t really know her at all.

Aside from his cinematic treatment of Where the Wild Things Are (2009), Spike Jonze is best known for directing the cleverly eccentric turned bizarre and disturbing Charlie Kaufman-scripted films Being John Malkovich (1999) and Adaptation (2002). Although Kaufman made no direct contribution to Her, his rampantly, unabashedly obtuse Synecdoche, New York (2008) has been cited by Jonze as an inspiration;[1] and while it may be said with some cause that neither Kaufman nor Jonze is quite the same without the other to complement him, nevertheless Her presents as very much of the Kaufman/Jonze oeuvre, taking a quirky idea and playing it not for laughs but rather for dark and gritty (sur)realism. There’s great honesty in this approach, but also the inherent danger that it can produce a high-quality movie of low-enjoyment; a film where nothing can be faulted, per se, yet where the viewer is left ever-so-slightly dissociated throughout, and will exit the cinema possessed in vague combination of feelings perturbed, unfulfilled and off-kilter. Her walks this line, trembling with a certain aplomb through an engrossing yet not particularly easy to watch two-hour traversing of a feature length tightrope (which reputedly was a wobbling half-hour longer before Jonze sought advice from fellow filmmaker Steven Soderbergh on how possibly to cut it back).[2] Phoenix inhabits his character with a sorrowful, lonely truthfulness, as does Amy Adams playing Twombly’s similarly sequestered, alone-in-a-crowd neighbour. The hollowness of the emotional world in which they live is craftily hidden beneath a technologically slick facade – a tragic yin and yang embrace that Jonze stitches together seamlessly and to great effect – and if Twombly’s job as a ghost-writer of personal correspondence were not unsettling enough in its own right, then his detached aptitude serves to bring home the point, the emotional forgery of scripting other people’s happiness falling like drizzled vinegar upon the limp lettuce of Theodore Twombly’s own private life. All in all, it’s a gleaming but downbeat near-future dystopia; terribly good in its own claustrophobic way, yet nonetheless an immersive depiction from which, at journey’s end, one might quickly seek to escape, if not with considerable relief then at least without undue regret.

If to Her we might ascribe a flaw – beyond that of not compromising the filmmakers’ artistic integrity to within maintenance parameters of an audience comfort zone (if indeed some critics might find this problematic) – then it is the inescapable shortcoming of the movie’s having pinned its dénouement, its thematic closure and telling twist of perspective, on a character whose depth, development and growing self-determinism are revealed but sparingly and only ever with directional reference to Twombly’s more overt character journey. Granted, it would be nigh impossible for filmgoers to experience with any sort of fidelity either such thoughts as must be driven by Samantha’s superhuman processing power, or for that matter the unfathomable intricacies of the AI’s multitasking or her lightning-quick capacity for growth – perhaps this keening lack of viewer/subject compatibility even constitutes in some measure the movie’s forlorn raison d’être – but no matter whether it be judged warranted, or of solipsimal necessity, still this remains a shortcoming that lessens the film’s capacity to pass meaningful comment on its central themes of what constitutes love and life. As such, Jonze’s brainchild is born into our world as a yearning future depiction of where the here and now may take us. She sparks briefly, lighting up a murky unknown, then is gone, our relationship with Her revealed at barb’s end as having been not only unnatural but in fact unattainable. Theodore Twombly will move on, as must we all, leaving everything and nothing behind, save for an odd not-quite-resonance and a strange feeling that whensoever next we shall encounter Scarlett Johansson, she’ll have a very particular, almost conspiratorial look directed at each and every one of us.

2. Harris, Mark, “Him and Her: How Spike Jonze Made the Weirdest, Most Timely Romance of the Year,” vulture.com, posted October 7, 2013 [http://www.vulture.com/2013/10/spike-jonze-on-making-her.html]
Posted by Stephen Theaker