The Professor and the Siren by Giuseppe Tomasi Di Lampedusa, reviewed by Stephen Theaker 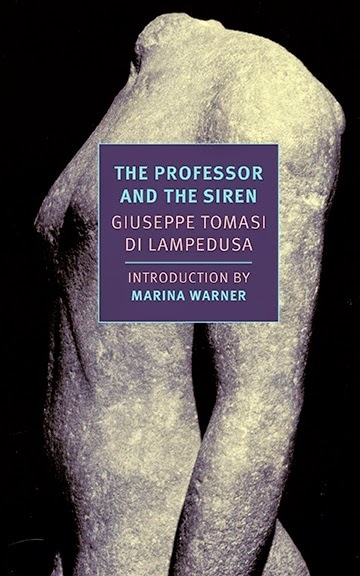 The Professor and the Siren (New York Review Books, 78pp) is a new translation by Stephen Twilley of three stories by Giuseppe Tomasi Di Lampedusa, all of which originally appeared in the 1961 collection I racconti. The book will also include an introduction by Marina Warner (not available for review).

The first and longest is the thirty-eight-page title story, “The Professor and the Siren”, in its Italian publication “La Sirena” (the title change is perhaps to distinguish this volume from others), about an elderly professor who reminisces fondly about his sexual encounter, at the age of twenty-four, with a mermaid who had “the smooth face of a sixteen-year-old”, an “adolescent” with “features of infantile purity” and “decidedly youthful sensuality”.

She’s much older than she looks, being in fact Lighea, daughter of Calliope, and she helps his career immensely by giving him the unique opportunity to converse in ancient Greek: he is now “the most illustrious Hellenist of our time” – but that doesn’t stop the story feeling rather grotty. “And were you all not disgusted,” the professor says to our narrator about his pair of lovers, “they as much as you, you as much as they – to kiss and cuddle your future carcasses between evil-smelling sheets?”

To finish the book one must get past the descriptions of this lovely old gentleman spitting onto the floor of the café on Via Po! The narrator finds this much more off-putting than the description of the mermaid, but relents when his friend explains that the spitting is for show, and the emissions that hit the floor contain no catarrh and very little saliva. Delightful.

The other two stories feature no fantasy elements, but are more likeable. In “Joy and the Law” (“La Gioia e la legge”) a downtrodden office worker wins a fifteen-pound panettone – he was voted the most deserving employee by his charitable colleagues. But his hopes of enjoying this uncommon treat fall prey to existing social obligations. “The Blind Kittens” (“I gattini ciechi”) tells of Don Batassano Ibba, and the legends that have grown up around him as his property empire expands across Sicily.

Though issues with sex and spitting spoilt the first story for me, two of the three were good, the translation reads elegantly, and their portrayal of a particular time and place feels authentic, whether it is or not. It’s probably not a book many of our readers will rush out to buy, and there are other translations available, but I found at least some things to enjoy in it and you may too.
Posted by Stephen Theaker