Still can't stop talking about it: Drunk with Blood by Steve Wells #bookaday 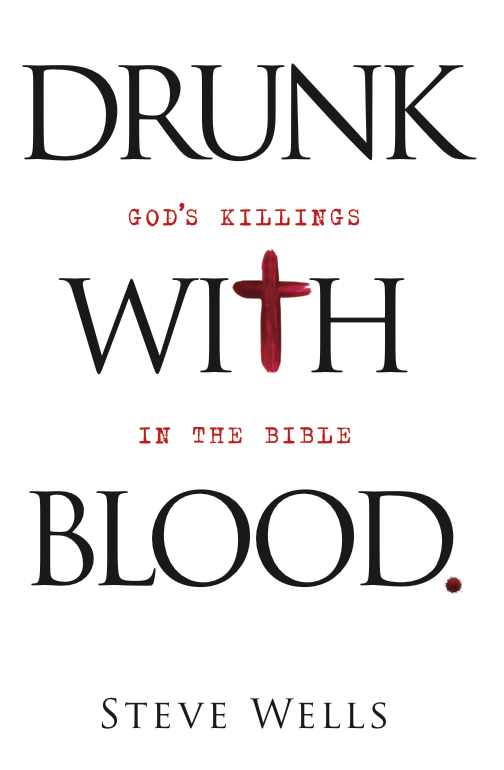 Day 19 of #bookaday and you must name a book you still can’t stop talking about. Well, some books I liked so much that I had to work hard to avoid bringing them up obsessively in reviews of other books. Like The Yiddish Policeman’s Union by Michael Chabon, Quartet and Triptych by Matthew Hughes, and Gorel and the Pot-Bellied God by Lavie Tidhar.

But if you’re looking at the total amount of conversation provoked by a book, I bet that, over the course of my lifetime, Drunk with Blood by Steve Wells will take the prize.

Let me explain: working at home, I’m here for every knock at the front door, and so I meet every door-to-door salesperson that is doing the rounds. Many of them are selling religion of an unsophisticated, literalist, fundamentalist and proudly irrational bent. My usual approach is to say, no thanks, not interested, but once in a while they don’t give up and we have a conversation.

I was always aware of some of the bad stuff the deity these people want me to start worshipping is supposed to have done, like killing everyone in certain cities, children included. I was told recently by one doorstepper about the two bears he believes his deity sent to kill forty-two children who were making fun of a prophet’s bald head!

It’s hard to understand why, if people (a) believe in such a deity, and (b) believe that deity to have done such appalling things, they would (c) choose to worship it. If something started doing that stuff today, we would only worship it as long as it took us to find the source of their power and send Jeff Goldblum in with a laptop to hack it!

And yet Drunk with Blood, going chapter by chapter through the source text, shows that the two or three things I knew about, more than enough in themselves to put their perpetrator beyond the pale of any worshipper with a conscience, were just the tip of the bloodstained iceberg.

It shows how the deity specifically orders the killing of children and suckling babies, kills other babies directly himself, punishes his servants for incomplete genocides, sells his followers into slavery, hardens hearts to provoke unnecessary wars, creates evil spirits, and sends out demon snakes. So many crimes! (If you believe it.)

(My theory is that if those things happened, it was a Goa'uld giving the orders.)

So that’s why I still can’t stop talking about this book. Truly amazing. And that’s even before you get to slaughtering the priests who lose a prayer contest, or killing hundreds of men to buy a wife with their foreskins, or killing thirty men for their clothes to pay off a debt, and the story of the golden haemorrhoids.
Posted by Stephen Theaker