Want to be one of the characters: Plague Ship by Andre Norton #bookaday

For day twenty-seven of #bookaday we are asked for a book where we would want to be one of the characters. After rolling this around for a while I came up with Plague Ship by Andre Norton, and the other books in the Solar Queen series, Sargasso of Space and Postmarked the Stars. 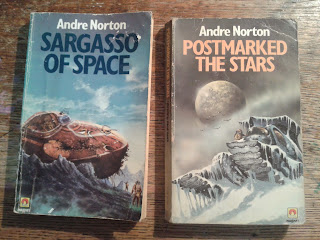 I bought the pictured copy of Sargasso of Space this month in a secondhand bookshop on a seaside trip, got a chapter or two into it on the way home before realising I’d read it, and carried on anyway. Not sure where my Plague Ship is (I think it’s an ex-library yellow Gollancz edition) but I’ll add a photo if it turns up.

I love stories about science fiction traders, have done ever since playing Elite for the first time on a BBC Micro and reading Robert Holdstock’s tie-in novella The Dark Wheel. (Plug: see the Black Swan series by Mitchell Edgeworth in recent issues of TQF for another fine example of the type!)

The crew of the Solar Queen are capable and hard-working, and if I was forced to live in a place as dangerous as the interior of a novel, they'd be good people to be around. They understand the importance of good training and procedures, come up with good ideas, and are always ready to take advantage of a lucky break.

I considered James White’s Hospital Station and the Sector General series for similar reasons (plus it’d be nice to live in a galaxy like that where all problems have solutions), but the Solar Queen won out. I'd struggle with the pleasant bedside manner, and no one expects that of a space trader.
Posted by Stephen Theaker