Paranormal Activity: The Marked Ones, reviewed by Douglas J. Ogurek 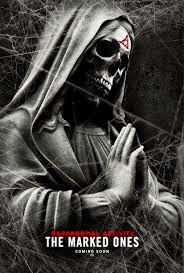 Thugs meet witches as horror dynasty takes it to the hood, and delivers yet again.

Caucasians, typically teens, encounter evil in a suburban or rural setting. For far too long, this formula was de rigueur for U.S. horror films. Then came the rash of films, many of them poor, in which a malignant figure or force terrorizes an ethnically diverse group of teens, still in a non-urban environment.

With PA: The Marked Ones, director/writer Christopher Landon not only upholds the strengths that make the film’s predecessors so enjoyable, but he also fully immerses the viewer in a non-Caucasian, non-suburban setting. In this case, it’s the gang-infested streets of a Latino neighborhood in California.

Powers that Corrode
Armed with a new video camera—this preserves the PA found footage technique—recent high school grad Jesse and friend Hector are having a little fun before the mundanity of adulthood begins. Though the film dallies a bit before it reveals that Jesse is somehow “marked”, its introduction offers a taste of inner-city Latino culture, and the relationship between two friends who have evaded the gangbanger fate.

The storyline of PA: The Marked Ones is reminiscent of that of Chronicle (2012): a young male discovers he has special powers—in this case, Jesse’s powers aren’t necessarily his powers—and mentally deteriorates. As Jesse, Hector, and their dispensable acquaintance Marisol connect the dots between the death during childbirth of Hector’s mother and the eerie goings-on within their neighborhood, Jesse becomes gloomy and confrontational. Tension mounts. Control slips. Scares escalate. Another effective horror story is told.

The film is a bit overindulgent in characters doing research and viewing maps. For instance, in one forgettable scene, Ali Rey, the teenage daughter in PA2, returns for an information dump at a picnic table.

The Basement Beckons
Like its forbears, PA: The Marked Ones offers sufficient doses of humour, pop-out horror, and—this is what makes these films so great—that exquisite anxiety elicited by situations in which little or nothing is happening on screen. Who would have thought that watching someone text in a vacated house could be so nerve-wracking?

Budding actor Andrew Jacobs and Jorge Diaz convincingly portray Jesse and Hector, lovable goofballs (especially Hector) whose antics rival those of the PA3 protagonists. Their harebrained schemes (e.g. sliding down a staircase in a laundry basket, taking young ladies to a murder scene with hopes of scoring) reveal that we’re not dealing with geniuses. Thus, these are the kind of guys who would go into a basement.

Simon Says: Stick to What Works
Most horror film series devolve from groundbreaking to lacklustre, sometimes very quickly. Scream comes to mind. It’s much like a drug use: the first film offers a potent experience that sticks, but then viewers just can’t get the same high with subsequent installments.

Though none can quite achieve the unease that lingers within the viewer long after the credits of the first film, each PA successor brings something new to the formula. For instance, besides the Latino bent, PA: The Marked Ones offers a battery-operated Simon Says game that answers characters’ questions with “yes” (green light) and “no” (red light). Then there is the hitherto uncharted territory—or should I say turf—of street thugs meeting witches, a mash-up that shifts from humorous (“Let’s smoke these bitches”) to creepy.

Critics continue to attack Paranormal Activity’s progeny and PA: The Marked Ones is no exception. The two arguments that seem to surface most often are “cheap scares” and weariness of the found footage technique. Regarding the former, again, it isn’t possible to achieve the same level of terror that the first film evoked. However, PA: The Marked Ones manages to carry through the essence of these films, and even ties back to the original in a surprising way. Plus, there’s nothing wrong with having something (or someone) fall into view every now and again.

And what of the found footage? To claim that the found footage technique has played its course is comparable to criticizing a band’s music because it continues to use guitars. Some of my favorite bands have pounded out album after album with little stylistic variation, and I have continued to buy their albums for a simple reason: I like what they deliver.