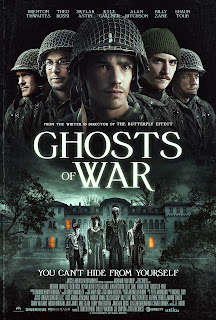 Soldiers sit in a mansion and wait for bad stuff to happen to them.

For some reason, five American soldiers get tasked with watching over a mansion that the Americans have commandeered from the Germans in Nazi-occupied France. The group that they’re relieving is eager to get out. The five fellows sit around and drink and smoke while the mansion’s nefarious objectives intensify. And there’s a mysterious word that keeps popping up: “Vetrulek.”

The Ghosts of War players include the following: Butchie (Alan Ritchson), a musclebound brute who likes fighting; Tappert (Kyle Gallner), a southerner who enjoys cutting off body parts and yanking out gold teeth from dead Nazis; Kirk (Theo Rossi), a guy with an itchy foot; Eugene (Skylar Astin), a scholarly type; and Chris (Brenton Thwaites), an unmemorable leader. What they have in common is a lack of development and little to put the viewer in their corner. The most engaging of the quintet is sharpshooter Trappert, whose off-his-rocker comments and contradictory actions give him some zest. Trappert’s cohorts are more than a little perturbed about the game of cat’s cradle he played with Nazi youth.

Ghosts of War, written and directed by Eric Bress, attempts to merge Saving Private Ryan-type soldierly bonding with the typical haunted house fare. Among the clichés are hushed or threatening voices, scraping, creaking, jump scares, cryptic symbols, and of course, creepy dolls and music boxes that start on their own. There’s even a brief scene when Eugene—he’s the one who wears glasses and drinks Earl Grey, so you know he’s the cerebral one—stands before a bookshelf and lectures.

The revelation of what is happening in the mansion is likely to make jaws drop for some and eyes roll for others. One thing is for certain—the reveal is hard to predict.

One aspect that sets this film apart from the typical war story is the threat of a secondary enemy. When they do take place, skirmishes get spiked with a supernatural elixir to make them more entertaining. Hence the military horror categorization. A more action-oriented and satisfying contender in this subgenre is Overlord (2018). Nevertheless, Ghosts of War is worth the watch, if merely to experience its twisty resolution.—Douglas J. Ogurek***