The first story in season two of the Companion Chronicles. Peter Purves returns to the role of Steven, space pilot companion to the first Doctor. In this adventure the two of them and Dodo land in Russia, just as Napoleon prepares to invade, and a rogue alien complicates affairs. The plot requires Steven to be a bit dopey, but the Russia of 1812 is a fascinating setting and overall this really does have the feel of an authentic story from the Hartnell period. Stephen Theaker ****
Posted by Stephen Theaker No comments:

Story two in the second series of Companion Chronicles. Frazer Hines plays Jamie McCrimmon, who shouldn’t remember anything of his adventures with the second Doctor, but for some reason he does, and he’s telling someone all about one of them. While Victoria is off studying graphology, the Doctor and Jamie land by accident on Helicon Prime, a luxury resort, booked up decades in advance and parked in a bit of space that keeps everyone unnaturally nice and peaceful. (It was moved there after visiting couples had shown a tendency, once they had a chance to relax and really think about things, to realise their mutual loathing and murder each other.) But someone must be immune, because there is a mysterious death, and then another, and now the Doctor’s got a real job on his hands. This story had some lovely incidental music that combined with the aliens and ambassadors to remind me quite a bit of Mass Effect. We get to hear how Jamie feels when the Doctor keeps him in the dark, and how he decides what to do in those situations. One dialogue exchange is as good as anything from the television series: “What are you thinking?” asks Jamie. “I don’t know, Jamie,” says the Doctor, “I haven’t finished thinking it yet.” Stephen Theaker ****
Posted by Stephen Theaker No comments: 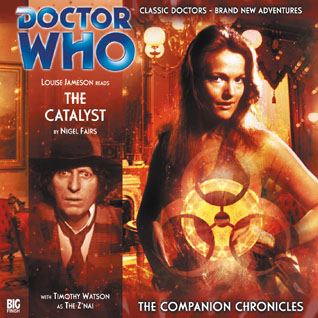 Louise Jameson returns to the role of Leela, the fourth Doctor’s second female companion. They visit Lord Douglas, who turns out to have travelled with a previous incarnation of the Doctor for several years and now has a secret trophy room full of mementos. His reasons for leaving the Tardis play an important role in the story. After initial frostiness, Leela warms up to Lord Douglas’s daughter, Jessica, who likes Rudyard Kipling and speaks with admiring horror of the suffragettes, and they discover that there is yet another secret within the trophy room, a secret with golden hair and wide, glistening eyes… The Doctor has taught Leela not to judge by appearances, but it’s a lesson Jessica may not get the chance to learn. This is the fourth story of the second series of the Companion Chronicles, and after listening to several of these in a row it’s hard not to feel the contrivance behind the various interviews and interrogations each companion must undergo. We’re grown-ups, could we not just agree to accept that Leela is telling us a story without a framing device? It’s also odd to hear a companion doing impressions. Sometimes it works well, but, as Louise Jameson acknowledges in an interview postscript to the story, her approximation of Tom Baker doesn’t quite work, sounding a bit like William Hague with a sore throat. Her Leela, though, is still fantastic, and the story gives her some full-blooded villains to chew on. Stephen Theaker ***
Posted by Stephen Theaker No comments:

Third in the Companion Chronicles, from back in 2007. Liz Shaw (played by Caroline John, as on television) recounts an adventure that took place during her brief spell with UNIT. A chum is late for a meeting so Liz pops round to her house: the friend is missing and her cat is dead. There is a befuddled cyberman on the loose, and it’ll take Liz and the third Doctor four short episodes to sort it out. Stephen Theaker ***
Posted by Stephen Theaker No comments: 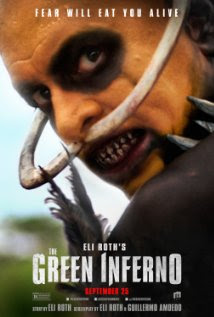 Eli Roth devises perfect film for family movie night or corporate team building event… if your house or office happens to be in hell.

It was literary giant Anton Chekhov, I believe, who said, “If you show in the first act images of female genital mutilation (FGM) during a university lecture, in the second or third act you absolutely must move toward the cutting.” Or was that guns he was talking about?

FGM is a real-world atrocity that splatter master Eli Roth holds over the victims (and audience) in The Green Inferno, a limb-hacking, skin-slicing tale of good intentions turned cannibalistic nightmare.

With The Green Inferno, Roth takes to new lows the depravity he so adroitly captured in Hostel (2005) and Hostel: Part II (2007). Once again, he traps young adults far away from home in a horrific environment occupied by depraved individuals, but this time, the collective antagonist shifts from psychotic plutocrats in a ravaged Slovakian cityscape to cold-blooded cannibals in a Peruvian rainforest.

A group of university activists travels to the Amazon with hopes of stopping developers from killing off a remote tribe and destroying its land. Protagonist Justine, daughter of a United Nations lawyer, gets pressured into going by Alejandro, the group’s snarky leader. The plane goes down, the group gets caged, and then the barbarity begins.

A Rocky Start Redeemed
The film’s beginning, which builds up to Justine’s decision to join the group, is dull and at times amateurish. Justine and her sickly-looking, smug roommate Kaycee wander around campus and engage in mindless chatter. Perhaps this was Roth’s attempt to show average kids in College Town, USA. Regardless, it took too long to get the characters into the enemy’s clutches.

However, once the viewer experiences these savages (in every sense of the word), the film’s early shortcomings can be forgiven. Eli Roth, who so enthusiastically bashed in the head of a Nazi officer as Sgt. Donny Donowitz in Inglorious Basterds (2009), is not about characters. Roth is about creating worlds where violence, gore, and victimization reign supreme. The Green Inferno exceeds expectations on all accounts.

The Mob and the Matriarch
One of the film’s key strengths is the way it conveys the tribe’s maliciousness, ranging from the overall portrayal of the group to the behavior of twisted individuals. The scene during which the tribe ushers the students to a cage exemplifies the former. The natives sway and chant and paw at their terrified prisoners. With their red body paint, the tribe members seem to shed their humanity and coagulate into a many-tentacled Lovecraftian monstrosity. The shifting, chaotic nature of Roth’s filming immerses the viewer in the danger.

Nobody embodies the tribe’s malice more than its wrinkled matriarch, whose piercings, yellow face paint, and milky eye suggest the literary lovechild of Ray Bradbury and Edgar Allen Poe. She sizes up her captives as she limps predatorily across the screen. She oozes potential violence as she uses a claw to examine their hair, faces, and (in the case of females) nether regions with the patience of a connoisseur at a delicatessen.

Raise the Bar for Bad
Films often show the chief antagonist commit a particularly heinous initial act to show just how bad he or she is. In the case of The Green Inferno, it’s the matriarch who fulfills this role, and in so doing, achieves the height of gore with a genuine showstopper of slaughter.

The reader may recall the wood chipper scene that earned Fargo’s (1996) Gaear Grimsrud a reputation for dispassionate brutality. The tribal matriarch, however, injects a Broadway-worthy flamboyance to her key scene, which makes Fargo look like Sesame Street. That scene kicks off what quickly becomes a smorgasbord of psychological terror (who’s going to be next?) and sumptuously over-the-top gore (e.g. children trying on flaps of skin as if at a fashion store).

The Green Inferno offers a lawless world where good isn’t necessarily rewarded, nor bad punished. Suffering is random, based on the whim of an antagonist whose motives are impossible to comprehend. The film raises some questions on benevolence versus self-preservation, and on the treacherousness of humans in contrast to the necessities of animals.

Kudos to Eli Roth for serving up a new classic in goreography and for continuing to slice apart Hollywood conventions. ***** Douglas J. Ogurek

The fourth story from the first series of the Companion Chronicles is an hour-long adventure for the fourth Doctor, K9 and the second Romana, recounted in character by Lalla Ward. The three of them arrive in a beauty spa where the treatments are somewhat extreme. The story ends up offering a positive message towards those of us tipping the scales in the wrong direction, but there’s a fair bit of fat description before we get there, and it sounds a bit odd coming from Romana. Stephen Theaker **
Posted by Stephen Theaker No comments: