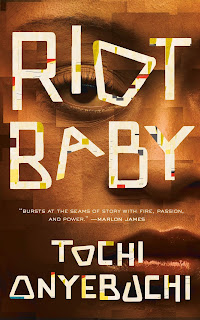 Sci-fi and urban magic realism merge in near-future tale that explores the challenges and potentials of young black adults.

Though Riot Baby suffers from clarity issues because it moves so quickly, this short novel does a fine job commenting on the difficulties that black Americans face. Kevin, the titular character, is born in South Central Los Angeles during the 1992 riots in that region. By the second chapter, Kevin, his sister Ella, and their mother have moved to another dangerous neighborhood in Harlem.

Ella has magical powers – Kevin calls them her “Thing” – that enable her to levitate (or crush) objects, manipulate temperatures, and fly. She can also see into the future and mentally transport herself and others… to other countries, to a racetrack, or even back in time to her mother giving birth to a stillborn. Their mother worries that Ella will do something bad. Fortunately, when Ella’s powers begin to move toward major destruction, she retreats to a desert to get them under control.

The most compelling part of the novel involves a young Kevin navigating his Harlem neighborhood while dealing with various threats. Another section details Kevin’s experience as a prisoner at New York’s notorious Rikers Island, where everything is a threat. Here Ella “visits” Kevin and slips into the heads of various people to see what they’re about to do or what is about to happen to them.

This story’s rapidity, along with the flipping back and forth in time, makes it a little hard to follow. Nevertheless, Riot Baby makes a statement about racial injustice and encourages the empowerment of black individuals. ***—Douglas J. Ogurek