If Then by Matthew de Abaitua | review by Stephen Theaker 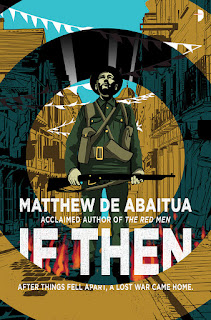 James is the bailiff of Lewes. When the Process decides that people – a village, a family, a child – must be removed, he cannot resist for long the urge to put on the armour and abandon himself to it, stomping around the countryside, scooping up those who refuse exile. He tries the peaceful approach first, popping round for a chat to see if they will leave freely, but of course even then he wears personal body armour in case of ambush.

Taking this job was the price of being allowed into Lewes after the economy collapsed and everyone became unemployed, destitute, desperate and homeless. Ruth, James’s wife, worked in a library in Hackney in the run-up to the great Seizure, and as other public institutions closed she saw it become the final destination of hundreds of people with nowhere else to go for help – and then there was nowhere at all.

Now that Ruth and James, and about ten thousand others, are a part of the Process, she works as a seamstress in the evenings and a schoolteacher in the day. The other people in town, all of them bearing the telltale data stripe from their crowns to their necks, fear her, because of her husband, believing that the Process will want to keep him happy, and thus will keep his wife happy. They also pity her: he’s not quite the man he used to be.

This relationship, which has already survived so much, faces a new crisis when the name Agnes appears on the eviction list. No one is surprised to see drunks, criminals and other undesirables on the list, though their families may fight tooth and nail to prevent their eviction, but Agnes is a child, one of Ruth’s pupils. “If you evict Agnes,” she says, “it will be difficult for me to love you.” James wonders, “Are we evil? Is this what evil looks like?”

The Process does have a benevolent side. On allocation day everyone, from Lewes and the nearby estates and villages, comes to the old supermarket, where “peeling posters showed bleached photographs of bygone normality, goods and prices, smiling faces, times of plenty, the strangeness of the lost everyday”. Now the shelves are filled by transparent boxes, containing the goods allocated to each person by the Process, sometimes even scraps of advice.

The strangeness of this life, this peculiar society, and the pressure it puts on this couple and everybody else, would be interesting enough in itself – this part is called If – but where a science fiction novel of the sixties or seventies might have stopped, this book takes a new direction: Then. The Process isn’t simply concerned with its participants’ wellbeing, it’s not something that happens to them: they are a part of it, and of each other, and it’s drawing them further in.

At the book’s beginning James finds Hector, a new-made soldier, hanging from barbed wire, “not quite a man”, a creation of the Process. His wounds reveal “spokes of tightly-packed crimson seeds like a pomegranate”. He wears a khaki tunic, puttees, hob-nailed boots, woollen trousers and an overcoat; a lifesize World War I toy soldier. James takes him to the Institute, an addled group of scientists on the fringe of the Process, mutated by their own experiments.

But Hector is only the beginning. Later come rifles, shells, cannons, “miles of barbed wire, legions of horse”, and, as the need for production overtakes capacity, men “with greatcoats fused to their skin and no feet in their boots”, until at last the humans of the Process themselves are co-opted into a phoney war, their memories muddled, their behaviour reshaped like the landscape, so that they fight and die in a replica of the coastline of Gallipoli.

This is a powerful novel (Angry Robot pb, 416pp, £8.99), both in its portrayal of the horrors of World War I, the wasteful loss of life, the dreadful conditions, the failures of those who let the war happen, and also in showing how easily the systems that support our modern-day lives could fall apart. And of course the book is all about the correlations between the two, about what happens when people get to experiment or play war games with the mass of human life, when we are treated as an expendable resource.

When Ruth enters the war in search of James, she meets a replica of Noel Huxley. “Every day is strange, threatening and uncertain,” she says of the future. “We are not in control of our lives.” To which Huxley replies, “That is a description of the soldier’s life.” The book suggests how much of ourselves we’d give up for a quiet life, and it’s hard to argue with its conclusions. ****

This review originally appeared in Interzone #261.
Posted by Stephen Theaker No comments: