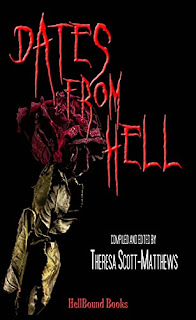 Make a date with this anthology… just watch out for jealousy, unrequited love, fanaticism, and blue goats.

This is an anthology of horror stories loosely connected by the concept of dating. Sometimes it’s two people (or otherwise) going on a date. Other times it’s an individual’s experiences in the wake of a date… or even an extended love triangle. The characters range from jilted lovers, call girls and drama queens to trash-talking reanimated corpses and demons who steal faces.

Some of the stories don’t pass muster. Stories that info dump and overindulge in details are the biggest culprits. I don’t care how tall something is, what colour a person’s hair is, the distance between x and y, or (God forbid) what the weather is doing… unless it contributes to the story. One story reads more like a dull history essay, while another abounds in characters thinking and even talking to themselves merely to reveal information to the reader. Another spends too much time building up to an outcome that the reader already knows. Then there are the stories that withhold the identity of the characters in the first few paragraphs. Just say who the person is.

And now for the good news: while there are a few duds in here, most of the works are entertaining and a few are astounding. The anthology further solidifies one of my contentions about horror fiction: when authors take their stories too seriously and/or attempt to write a scary supernatural story by drawing from horror tropes, their work often feels silly… like an undergraduate poetry student trying to write something scary for the first time.

Conversely, the writers in Dates from Hell who exploit the inherent humour in merging horror and dating offer the most impressive works. In Carlton Herzog’s “Out of Town Strange”, for instance, a mortician takes a reanimated corpse possessed by a wisecracking Wendigo on a wild date in his ’65 Mustang. This corpse is a feisty Alabaman who in some places fits in, but not so much in others. Her words and actions are exaggerated and vibrant. In exchange for going places, she dangles the carrot of letting the forty-year-old virgin narrator “poke” her. She gives a new meaning to the phrase “expose oneself” and encourages him to think of her as his “date from hell”. The story, rich in wordplay and witticisms, leaves one wanting more. I could see a whole book with these two going on various adventures.

Another comedic favourite, “She Has My Heart” by Sonny Zae, is about Nash, a lowly zombie from Putrefaction Palms in Hollywood. He falls in love with Carolanna, a female zombie who has literally stolen his heart by reaching into his chest and snatching it. There is a problem with them seeing each other because she’s part of the most powerful zombie family in LA: the Corpsicana Cannibals. Like Herzog’s piece, this one is full of verbal acrobatics and invention, such as the zombie holiday called ThanksLiving, during which they eat a roasted Turk and open gravy. Zae writes amusingly about the details of Carolanna that Nash finds attractive. Her tongue, for instance, is a “delectable blue gray”. Her teeth remind him of “scattered yellow gravestones in an abandoned cemetery”.

In “Quality Meat”, a ridiculous yet captivating piece by Fulvio Gatti, a couple is on a date in an Italian restaurant when the waiter opens a covered dish to reveal something unexpected. The couple attempts to escape the restaurant while being pursued by a psychotic family. This has the feel of an ’80s action film: it’s funny and the characters’ reactions are unrealistic. When the reason for the family’s pursuit of the couple is revealed, it seems shallow. And yet, I want more.

Dates from Hell isn’t all fun and games. Its creepiest entry comes courtesy of Scott McGregor. “The Girl Who Loved Senpai” offers a moral: those who will stop at nothing to get what they desire may very well pay a steep price. Akari-chan, a junior at a Tokyo high school, wants more than anything to have the dashing senior Senpai fall in love with her. The problem is that Senpai doesn’t even notice her. Akari-chan has a brutal plan that will ensure he falls for her and they will live happily ever after.

What “The Girl Who Loved Senpai” does for unrequited love “Zara-Lena’s Surprise Dinner” by Eowen Valk does for fanaticism. Initially, I was wary of this one when I discovered that the protagonist is a writer. Valk, however, makes it work. Horror writer Cedric Shard holds a contest, the winner of which gets to spend time with him at a location of their choice. Zara-Lena, the seductive winner, brings him to a home in the middle of a lake, then takes her fandom to the extreme. This one has the makings of a classic horror story in the vein of Stephen King’s Misery and one of those darling shorts from Creepshow 2.

Dates from Hell also offers a couple strong stories about womanizers learning a painful lesson. In Adam Bell’s “Alpha Male”, Frankie, who is used to one-night stands, represses his “player tricks” in a more honest attempt to bed Marianne, a lesbian he finds extremely attractive. He falls for her, and now he doesn’t understand why she has him tied up. Despite its brutality, the story comments on shedding the male desire to conquer the woman sexually and instead embracing a more fulfilling relationship. Ramsey, the “protagonist” in “slriG, slriG, slriG” by W.P. Johnson, has gone through a string of women. He’s the kind of guy who will tell women what they want to hear to make them his sexual conquests. But Ramsey meets his match with goth girl Steph, whose online profile reveals some eccentric behaviours. Who puts their dead cat in the freezer anyway?

Get ready for some major violence in Michael J. Moore’s “The Mean Girl”. Five months after her friend goes missing, the unnamed narrator who considers herself “damaged goods” visits the mobile home of Kirk – a poor, yet handsome high school classmate. She’s had her eye on Kirk for some time, but she can’t “afford to be seen” with him until now. She insists she’s not a mean girl like the one from the movies. Key to the story’s enjoyment is the unpredictability of the unnamed first-person narrator and Kirk. The piece explores class differences and throws in some twists.

A few stories take on a more literary bent as they delve into complex relationships and the ensuing painful emotions. And what better emotion to characterize young love than jealousy? In “The Tart” by Alexandria Baker, Liz steals part of a strawberry plant owned by Nellie, who not only lands the man that Liz is interested in but also gloats over her conquest. Baker offers vivid descriptions of the berries, which come to symbolize Liz’s bitterness, jealousy, anger, and inability to let go.

Victoria Witherkeigh’s “Teenage Wasteland” covers several years in the lives of three friends who meet at a California beach once a year starting at age ten. It’s apparent at the outset that there are jealousies, especially among the two boys. These feelings bubble to the surface and interfere with their lives as they grow older. The ocean and its tumultuousness become a reflection of what’s happening within the characters.

Dates from Hell even dips into the bizarro subgenre with “Wears Her Heart on a Rope” by Eddie Generous and Theresa Braun. Although it has some lack of clarity in the beginning, the story quickly redeems itself to become a thoughtful commentary on the generational impact of domestic violence. On the surface, it’s about a male figure who has transformed a woman into a goat and dyed its hair blue. On a deeper level, the story comments on the way some men treat women (i.e. like a goat), with the blue dye suggesting the shallow external beauty that comes when males bestow upon females ornamental gifts that make them feel special. Despite what this man has done to her, the she-goat continues to look to him as her protector. This is a story that begs the reader to, like a goat with its cud, keep chewing on it – each cycle is likely to unveil something new.

Reading a short story anthology is comparable to a speed dating event. In Dates from Hell, some dates won’t appeal to you, but chances are that many will. And maybe if you really like a few authors, perhaps you can check out more of their work and a long-term relationship will blossom.****—Douglas J. Ogurek

Theaker's Quarterly Fiction #70 is out at last in paperback and ebook! 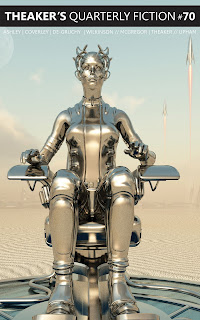 Theaker's Quarterly Fiction #70 is here at long last! It features four short stories: “Some Things Drift Apart” by Allen Ashley, “See How They Run! See How They Run!” by Harris Coverley, “July Job Offer” by Charles Wilkinson and “In the Shadows of the Past” by Alex De-Gruchy. Plus Rafe McGregor and Stephen Theaker review the work of Elaine Graham-Leigh, Shona Kinsella, Joe Dever, Alex Garland, and Scott Frank and Jon Cohen. The cover art is by Steve Upham.

Note: we've held two stories that were originally planned for this issue – “Spending the Government’s 28” by Ross Gresham and “The Ninth Mandala” by Zachary Toombs – over to issue 71. Out soon!

Allen Ashley is an award-winning writer and editor based in London, UK. He has recently featured in BFS Horizons and in the anthologies Time We Left edited by Terry Grimwood (The Exaggerated Press) and Terror Tales of the Home Counties edited by Paul Finch (Telos). Allen is a former President of the British Fantasy Society. His most recent book is the poetry collection Echoes from an Expired Earth, now available as an ebook for 99p on Amazon UK: www.amazon.co.uk/Echoes-Expired-Earth-Beats-Ballads-ebook/dp/B086XH41WH/.

Harris Coverley has had short fiction published in Curiosities, Hypnos, The Centropic Oracle and The Periodical, Forlorn, amongst many others, as well as previously in this magazine. He is also a Rhysling-nominated poet, with verse in Spectral Realms, View From Atlantis, Scarlet Leaf Review, Corvus Review, Ariel Chart and elsewhere. He lives in Manchester, England.

Alex De-Gruchy is a writer whose work has included comic books, videogames, prose fiction, film, radio and other audio, poetry and more. Find out more at www.alexdegruchy.wordpress.com or on Twitter at @AlexDeGruchy.

Steve Upham provides the cover art for this issue. He published some smashing books as the proprietor of Screaming Dreams, and some great stories as the editor of the Estronomicon ezine.