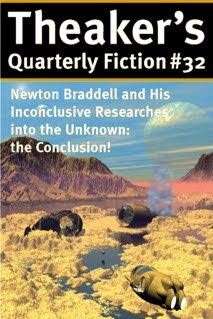 You can get the two parts of this issue free from us from here (TQF) and here (Pantechnicon). Paper copies of the two, arranged as a fancy flipbook, are available to purchase from Lulu. They are also available from Feedbooks for free download in various formats to read on your Kindle, Sony Reader, Nook, iPad etc, and even in a simplified pdf that might be handy for anyone reading the issue onscreen.
Posted by Stephen Theaker No comments: