Viator Plus, by Lucius Shepard — reviewed 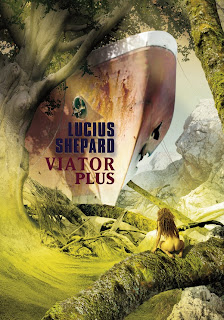 Viator Plus begins with “The Emperor”, the only piece of outright science fiction in the collection. A novella about humans surviving among the machines, it’s one of the most convincing depictions I’ve read of an environment in which humanity is no longer the dominant lifeform. It is followed by six short stories; varied in subject matter, consistent in quality. In “After Ildiko”, Pederson, “an idler, a self-deceiver, an American fool of no consequence, on vacation from a life of petty crime and monumental indecision”, rides a South American barge with Swiss Ildiko and treats her badly; “Chinandega” is a town of misery and sexual degradation into which a brother dives in search of a missing sister; “The Ease With Which We Freed the Beast” concerns angry teenagers and what they grow into; and “Larissa Miusov” is a mysterious, beautiful Russian with a remarkable talent for pre-production. Two stories concern a singer once dubbed the Queen Mother: “Carlos Manson Lives” provides a poolside view of LA, while “Handsome, Winsome Johnny” finds her dissatisfied while recording a new album. There is very little happiness in these stories, and their view of relationships is bleak. There’s lots of sex, but it tends to the miserable, as in “After Ildiko” and “Chinandega”. Happiness tends to result from deliberate self-deception or relinquishing one’s identity: if you can’t be happy, become someone else. The horror lies in how repugnant that new person might be.

Though the stories are substantial, the main course is “Viator”, an excellent and bewildering short novel. Viator is a ship, a “freighter whose captain had steered her into the shore at so great a speed, she had ridden up onto the land, almost her entire length embedded among firs and laurel and such”. Wilander is one of five men engaged to live aboard the ship, for reasons initially unknown. Frightened by the eccentricity of his crewmates, he is more frightened yet by the sense that he is just as bad. Whether the ship is moving or not, they are men on a mission, and he is determined to see it through. I loved this novel; it’s perhaps the best novel I read in 2010. Given the layers of meaning, the astonishing writing, and the remarkable ideas, this book would repay much more careful study than I can offer it here. One notable feature is its extraordinarily long sentences, often used to carry you along with Wilander as he experiences the stranger parts of his adventure: the previous quotation comes from a sentence that is in total half a page long. Another point of interest is the importance of the age fourteen throughout the collection: it's the apparent physical age of the girl-thing Wilander encounters in "Viator", the age at which Palmira Miguez went missing in Chinandega, the age at which the narrator of "The Ease With Which We Freed the Beast" struck his father in the face, and the age of the prostitutes imagined by Pederson.

"Viator" is a novel that could be read and read again to draw out such themes. Like those shorter pieces in the book it crosses genres, or rather draws on them all, perhaps reflecting that in fiction why things happen (often the dividing line between genres) can matter less than how those events affect the protagonists. Is “Viator” science fiction, fantasy, or horror? Readers may come to different conclusions, or to none at all, but it’s a brilliant novel, of that there’s absolutely no doubt.