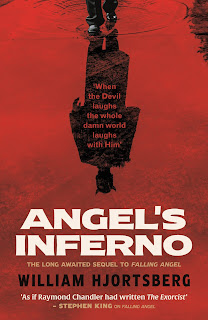 The late William Hjortsbjerg (1941–2017) was a Hollywood screenwriter best known for his screenplay of Ridley Scott’s Legend (1985) and his novel, Falling Angel (1978), which was filmed as Angel Heart (1987), directed by Alan Parker.  I recently reviewed Angel Heart for TQF, discussing the film and the novel, in consequence of which this review includes spoilers for both.  Hjortsberg was not a prolific writer of books, publishing seven novels, one collection of short fiction, and one biography, with only Falling Angel achieving critical acclaim.  He published a single novel in the last twenty years of his life, Mañana (2015) and his last before that was Nevermore (1994), which may have been the inspiration for James McTeigue’s disappointing The Raven (2012), though I’ve found no acknowledgement of the connection.  Nevermore is considerably better than The Raven, featuring Harry Houdini and Conan Doyle as a detective duo (they were real life acquaintances), a fine example of an occult detective story that blends fact with fiction.  I’ve been interested in Hjortsberg for some time, but – like so many screenwriters – details of his work and life are difficult to find.  I stepped up my efforts when I reviewed Angel Heart and was surprised to learn that not only had he been working on a new novel at the very end of his life, but that it was a sequel to Falling Angel.  (There is no mention of the book on his own website, which is the most comprehensive source of information on him: http://williamhjortsberg.com/.)  I had to re-read the final chapter of the latter to refresh my memory as to whether a sequel was possible without employing retroactive continuity… it is and it was first published by Centipede Press in July 2020, as a limited edition hardback paired with a new edition of Falling Angel that sold out on pre-orders.  The specialist crime fiction publisher No Exit Press, which is part of the Oldcastle Books Group and seems to be enjoying something of a renaissance of late, released the paperback and Kindle editions three months later.

Falling Angel and Angel Heart were both paradigmatic occult detective stories and their achievement lies in maintaining a rigorous internal logic, by means of which the crucial tension between the rational detective and the extra-rational setting is maintained.  There is a special relationship between detective fiction, including occult detective fiction, and narrative representation.  In every narrative there is a real or imaginary sequence of events that takes place in the storyworld.  In an autobiography, this sequence of events would begin with the author’s birth or – more likely – the birth of his or her parents or grandparents and end shortly before the decision to write the autobiography or with the publisher’s decision to publish the manuscript.  In a detective story, the sequence of events readers or viewers are invited to imagine begins with the murderer planning the murder or with a disappearance and ends with the murderer being identified and usually (but not always) brought to justice or with the missing person found, whether dead or alive.  Regardless of whether the representation is documentary or fictional, however, the story itself – the words or words and pictures on the page or the images and sounds on the screen – does not represent all of these events.  Usually, a detective story will start shortly before the discovery of the corpse and end before the trial begins.  In this way, in both documentary and fictional narratives, the narrative representation is a superstructure underpinned by the base of the real or imaginary sequence of events.  Detective fiction standardly dramatises, stages, or thickens the relationship between story and sequence of events by presenting both the story of the crime (the sequence of events) and the story of the investigation (the story) together, the progression of the detective involving him or her repeating, retracing, or revisiting the progression of the criminal.  Occult detective stories standardly begin with a detective fiction plot, which they may or may not follow through to the conclusion as the supernatural intrudes into the investigation.  What is essential for the suspension of disbelief is that when the supernatural does intrude, it intrudes in a manner that is consistent with the logic of the storyworld.

The main difference between detective fiction and occult detection is the variations that are available to the author or director in terms of the protagonist and the setting.  The detective can be identical to a crime fiction detective, such as Detective John Hobbes (played by Denzel Washington) in Gregory Hoblit’s Fallen (1998), or a crime fiction detective with esoteric knowledge, heightened sensitivity to the supernatural, or both, such as Sarah Monette’s Kyle Murchiston Booth (2007). The detective may have some supernatural powers him or her self, such as Mike Carey’s Felix Castor (2006), or be a supernatural being, such as Cassandra Khaw’s John Persons (2016). In this respect, the Harry Angel of Falling Angel and Angel’s Inferno is almost identical to a crime fiction detective. The setting can similarly be almost – but never actually – identical to the real world, as in Mark Valentine and John Howard’s The Collected Connoisseur (2010), or one in which the illusion of the everyday conceals a supernatural reality, as in ABC and Showtime’s Twin Peaks (three seasons, released in 1990, 1991, and 2017).  Alternatively, the setting can be one in which the supernatural is a ubiquitous to the real world, as in David Tallerman’s Detective Fièvre stories (two, published in 2009 and 2015), or a different world entirely, itself a speculative fiction, as in Simon Kurt Unsworth’s Hell in his Thomas Fool series (two novels, published in 2015 and 2016). Once again, Angel’s world is almost identical to the real world of 1959 and most of Angel’s Inferno is set in Paris in that year. The combination of a more or less realistic detective with a less or more supernatural setting provides the subgenre with its great variety, from Kat Richardson’s Greywalker (2006) to Gerlado Borges’ Philosopher Rex (2010) to Fox’s Sleepy Hollow (four seasons, from 2013 to 2017) to Neil Marshall’s Hellboy (2019).

Falling Angel ends with Angel being arrested for a murder that he did not commit, but for which there is conclusive evidence of his guilt and for which the arresting officers, Lieutenant Sterne and Detective Deimos, are seeking the death sentence.  Angel is stoic and his resignation suggests that he thinks Louis Cyphre, the client who framed him for multiple murders, is actually Satan himself.  Angel’s Inferno begins minutes later, at the crime scene, with Angel in handcuffs.  Hjortsberg exploits both the particular tension between rational detective and extra-rational setting that he established in Falling Angel and his mastery of horror fiction in terms of much of the content being implicit rather than explicit.  As such, the Angel of Angel’s Inferno (unlike the Angel of Angel Heart) is not even sure that he is Johnny Favorite, the singer who sold his soul to Satan, let alone convinced that Cyphre is the owner of that soul.  The plot of Angel’s Inferno is thus driven by two puzzles: first, whether Angel is Angel or Favorite; and second, whether Cyphre is Satan or just a convincing imposter.  An affirmative answer to the second question entails an affirmative answer to the first, but an affirmative answer to the first does not entail an affirmative answer to the second.  Angel’s plan, once he escapes from custody, is to find Cyphre and kill him – whether for the purpose of revenge for setting him up for murder or whether to avenge his daughter’s murder is not entirely clear.  One of the ways in which the Angel-Favorite puzzle is set up with both strength and subtlety is the change of style in the first person narration.  It is immediately obvious that Angel in Angel’s Inferno is just not as likeable or sympathetic as Angel in Falling Angel.  He escapes from custody by killing Deimos and exhibits neither remorse nor regret.  I initially thought this was a symptom of the four decade gap in the writing of the two novels, but it quickly becomes clear that Angel’s tone is a symptom of the internal struggle between Angel and Favorite.

One of Hjortsberg’s skills as a storyteller is the way he effortlessly subverts his readers’ expectations: having structured the narrative around the two puzzles, it comes as a surprise when the answer to the first is solved one sixth of the way into the novel and the second three quarters of the way through.  Angel’s actions and motivations have all been focused on discovering Cyphre’s whereabouts while evading both Sterne and the Paris police.  He is not just focused, but obsessed, fully prepared to die trying to kill Cyphre should Cyphre indeed prove to be Satan.  Instead of creating an anticlimactic final hundred pages, however, the revelation of the identities of both the protagonist and antagonist actually increases the suspense, once again subverting my expectations about the conclusion towards which the narrative was making its inevitable way.  Once Angel has solved both puzzles, he is offered a price for the opportunity to kill Cyphre by the Circle of Thirty, an occult cabal.  This can only be bought by skinning a human being of the Circle’s choice alive, making an audio recording of the torture, and then delivering the skin and the recording in person.  Hjortsberg has planned this moment from the very beginning, foreshadowing the identity of the victim using formal rather than substantive means.  Bijou Jolicoeur, Angel’s mature black lover, has a tattoo of Baron Samedi on her right breast, ‘wrinkle-free ebony features’ as ‘luxuriant as midnight’, a complexion that is ‘smooth darkness’ and ‘molasses’, and – most ominously – undresses like ‘a snake shedding her skin’.  It is from this point, the last forty pages of the novel, that suspense escalates to terror in a series of staged climaxes that build to an incredible crescendo that closes the narrative as it opened, in medias res.

I have only three criticisms, all minor.  Chapters 19 and 20 (of 52) are both exposition and nothing else, pure ‘information dumping’ as Angel reads a book on comparative religion.  Given Hjortsberg’s aesthetic achievements in and with the novel, these two unwieldy chapters back to back provide an unwelcome interruption to one’s reading pleasure.  He also makes use of two real people: William S. Burroughs has a supporting role and Albert Camus a walk-on part.  There is nothing necessarily problematic about this (I have just praised Nevermore for using Houdini and Doyle), but the two are introduced in consecutive chapters (17 and 18) alongside mention of Jean-Paul Sartre and Simone de Beauvoir and I found the sudden appearance of a handful of historical characters a distraction from an otherwise engrossing storyworld.  Like the two chapters of exposition, it was too much too quickly.  Finally, I may be wrong, but I wasn’t sure about whether some of Angel’s language wasn’t either anachronous or out of character – particularly ‘gender’, ‘cancer stick’, ‘Beatnik’, and ‘smack’.

I was well into the novel before I realised that I’d been quoted in the front matter: the first page has nine comments on Falling Angel, including one from me, published in 2009.  As my name appears between Stephen King and J.K. Rowling, I think my career as a reviewer has just peaked.  If Falling Angel is exemplary occult detection – which, like Angel Heart, it clearly is – then Angel’s Inferno is exemplary occult noir.  In fact, to stay with that first page of praise, Thomas Keneally, who is best known as the author of Schindler’s Ark (published in 1982 and filmed as Schindler’s List by Steven Spielberg in 1993), describes Falling Angel as a ‘sort of ultimate detective story’.  I think he is absolutely right, in which case the final sentence of Angel’s Inferno announces the sequel as the ultimate noir fiction.  Hjortsberg is at the height of his powers as a novelist and Angel’s Inferno is well worth the forty year wait.