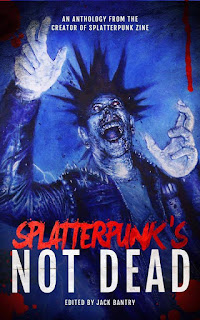 Splatterpunk may not be dead, but if this is the measure, then it’s only half alive.

Splatterpunk’s Not Dead purports to reignite the presumed dying art of the splatterpunk horror subgenre. However, only half the stories within the anthology offer something both inventive and splattery. The remaining stories range from so-so to forgettable, plus there are quite a few mistakes.

After a tepid foreword by Jeff Burk, the anthology kicks off with Nathan Robinson’s “Another Bunch of Flowers by the Road,” a plotless, shallow affair in which a guy goes on a killing spree using a souped-up, weaponized vehicle. Not the collection’s best story, but certainly entertaining as the crashes and body count accumulate.

In “High Fashion” by Robert Essig, a washed-up fashion designer feels the pressure to create dresses as well as he did in his younger days, when he was constantly partying and hopped up on drugs. So he returns to this lifestyle and does whatever it takes to reclaim his prominence.

No surprise to this reviewer that Jeff Strand’s “Beware! The! Beverage!” stands out as the collection’s best work, even if its ability to meet splatterpunk qualifications is questionable. Most of it is a conversation between two men about Rocketship, an energy drink spiked with Martian blood… from the planet of Martia, of course. Like many of Strand’s works, the dialogue-heavy story features one character pointing out the stupidity of the other. For instance, when Malcolm tries Rocketship for the first time, he proclaims, “I am the most powerful human being the world!” His friend Charlie points out that there are professional athletes who spend their whole lives training, so Malcolm is “probably not even top twenty”. Within the last two pages, Rocketship leads to the downfall of humanity. Funny tangents, lack of segues, matter-of-fact descriptions… all the things that make Strand’s work such a pleasure to read.

The anthology’s other gem is Saul Bailey’s “Eggbeater”, in which a Forrest Gump-like young man is born with an eggbeater instead of a penis. He stops by the home of an attractive young housewife, and the two of them engage in some hypersexual baking. Entertaining and unexpected.

In “Please Subscribe” by Adam Cesare, an adolescent girl starts video blogging with the hopes of gaining a large following. The story is written in collective first person: the “we” speaking are the viewers watching the girl deteriorate from innocence to mental instability over the course of a month.

Shane McKenzie’s “Abstinence” follows Christian teens exploring their sexuality in a closet. One wonders why this story is in this collection — though it’s written well enough, it’s just not splatterpunk.

“The Androgyne” by Brendan Vidito introduces a couple literally attached at the hip and the lengths to which they’re willing to go to separate themselves. The story takes itself a bit too seriously for all the ridiculousness that’s happening within.

In the final and longest story, Paul Shrimpton’s “Walter’s Last Canvas,” a drunken, washed-up artist finds a book called Diabolist — it contains spells and incantations — and uses it to create a painting that enables him to be reborn as a young man. Either the author missed or was inspired by Wilde’s The Picture of Dorian Gray. The most impressive thing about this story is the author’s graphic description of a suicide attempt from the individual’s perspective. On the whole, the story gets bogged down in lengthy paragraphs and too much detail. — Douglas J. Ogurek ***