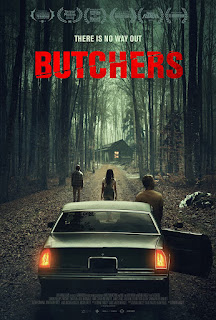 Butchers, directed by Adrian Langley and clearly influenced by The Texas Chain Saw Massacre, takes the typical farmhouse slaughter-fest and adds a tad of the intellectual and, um, aesthetic? I’m thinking of a scene in which the camera lingers on hacked-up pieces of flesh with flies buzzing around them. Artsy, right?

Yes, the backwoods brothers Owen (Simon Phillips) and Oswald (Michael Swatton) Watson will inflict on their victims the physical torment common in country bumpkin horror, but this film also offers a psychological component, particularly through Owen, the verbose shot-caller in this sibling relationship. He gets into the faces of his victims. He sniffs them. He wields his power. He threatens them with painful consequences if they don’t follow his rules. He even pits his victims against one another.

The film, which takes place in the eighties, resorts to a coincidence for its inciting incident: a car transporting two couples breaks down on a back country dirt road. Two of the young adults, Taylor (Anne-Carolyne Binette) and Mike (James Gerald Hicks), are having an illicit affair. It isn’t long before the couples encounter Owen, owner of Watson’s Garage, and Oswald, a deranged lunatic who carries a weapon – it looks like a cross between a machete and a saw – and walks through the woods looking for victims.

Jenna (Julie Mainville), the jilted lover, is portrayed as the film’s main protagonist. In contrast to her more traditionally floozy counterpart Taylor, Jenna is quieter and bolder. When she’s threatened by her tormentors, she stares at them defiantly.

The brothers keep their captives in a dilapidated barn. In one room, the camera repeatedly offers glimpses of a growling figure in an adjacent space. This leads the viewer to consider: who/what is that and will he/it make an appearance?

Butchers could be the first horror movie of its kind in which a mentally unstable character reads the most famous passage from Hamlet. What was the point of this? To add an artistic bent? Or to kill time? Interestingly, Oswald gets stuck on the word “consummation” and his brother, without looking, offers the correct pronunciation. One wonders how educated Owen is, and what he is helping his brother consummate.

If horror movies that devalue women irritate you, then this one probably isn’t for you. But perhaps this comes with the territory – dirty bearded guys who live in the country and refer to women as “pieces of meat.” Watch this movie, if for no other reason than to remind yourself that if your car breaks down and you come across hairy, dirty men who act bizarrely, then you’d best run the other way. – Douglas J. Ogurek ****