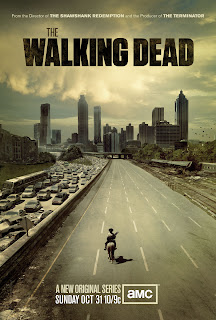 Post-apocalyptic programmes don't tend to do very well. Jericho, Jeremiah, The Survivors (both versions), The Tripods, Three Moons Over Milford, etc – not many have made it past or even reached a third series. After all, just how miserable do you want to make yourself just before bedtime? But The Walking Dead is good enough that it might just buck the trend. The six-episode first season certainly looks great. Occasional shots of massed CG zombies are used sparingly, physical make-up being more frequent. The story follows young police officer Rick Grimes as he emerges from hospital and makes contact with other survivors. This Life’s Andrew Lincoln makes an excellent lead and the rest of the cast is just as good. In Frank Darabont, director of The Shawshank Redemption and The Mist, the programme has a showrunner to die (and then return from the grave) for.

Unusually, the writer of the comic, Robert Kirkman, is also on the writing team of the adaptation, and thus he gets the chance to do what you can't in a serial comic: have second thoughts, and go back and rewrite things. So interesting characters and relationships previously lost early on are given more time, and the last couple of episodes introduce a situation that wasn't in the comics I read; a good sign that readers won't simply be sitting around waiting for expected events to play out. One less welcome change, in my opinion, is that the series shows a character having premonitions. For once it would be nice to have a fantasy show that didn't rely on prophecies for lazy foreshadowing. One other unfortunate change from the comic is that these zombies sometimes run as well as walk, which makes behaviour that was reckless in the comic perfectly insane in the TV programme.

On TV the influence of (or just structural similarity to) Lost is even more notable than in the comics (of which I've read the first fifty): the adventurers head out on sorties while everyone else makes camp and waits for them to return. What it perhaps lacks in comparison is a bit of mystery and humour, but perhaps when the reasons for the zombie outbreak are investigated that will lead in some interesting directions. I hope the series stays broadly realistic: in the second half of the Compendium the comic veered sharply into OTT Garth Ennis territory; right for Garth Ennis, but wrong I think for a show that has thrived on a realistic approach. But they haven't set a foot wrong so far, so perhaps I should have faith that whichever storylines are followed they'll make good TV out of them. Post-apocalypse shows don't last, but this one feels different. I can't wait to see more.