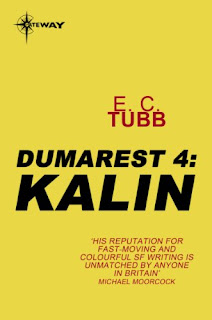 The format of the Dumarest books is perhaps ideal for a long-running series. Earl Dumarest is searching for Earth, travelling from one planet to another, sometimes in time-dilated luxury, the next in frozen popsicle coach. On each world he has two goals: to find clues to Earth’s location, and to raise enough money to buy a ticket for the next hop. Each planet has its own cast of characters, its own particular challenges. That means you can pick up any in the series without struggling to follow continuity: any of the four books I’ve read in the series could have stood as the first.

Having said that, Kalin is something of a format breaker, in that it sees Dumarest - and Kalin, his companion on this adventure - travelling between planets mid-book. It begins on Logis, with the Bloodtime imminent. Seeing an attractive girl chased by a “yammering, screaming mob” giving legal vent to a year’s frustrations, Dumarest dives into the fight, snaps some bones, buys her a ticket and gets her back to the apparent safety of the spaceship, where they begin to fall in love. A pair of saboteurs provide Dumarest with more opportunity for action, but ultimately cause our heroes to be stranded on a dead-end world.

Chron is Dumarest’s nightmare: a planet where there’s no chance of making enough money to leave. Will Dumarest’s courage, toughness and sense of honour be enough to save them? Well, there’s another couple of dozen books in the series, so what do you think? What’s more, he discovers the secret behind Kalin’s unearthly powers and does lots more good fighting (which is what these books are mainly about). He reveals a bit of a sexist streak (“Woman-like, she was indifferent to the comfort of others when a problem filled her mind”), but one imagines Kalin hardly cares about that when he’s working so hard to keep her alive.

Though at times this book surprised me, for example with its thoughts on living in poverty, and the choice between freedom and slavery, it wasn’t exactly brain food; it was exciting, unchallenging and straightforward, and that’s okay. It’s not the only kind of book I like to read, but there’s room for it in my life. The chances are good that I’ll go on to read the rest of the series, if they continue to offer the same kind of pleasures.

However, there was a huge problem with this edition: it was one of the shoddiest professionally released books I've ever read. It looks like it's been scanned in but not proofed. I won't give many examples, though two dozen are highlighted in my Kindle notes, because it feels wrong to offer free proofreading when the publisher has apparently not bothered to pay anyone to do it. There were two occasions on which characters smacked their hps after eating the last erf their food. If this is representative of the SF Gateway titles, I’ll regret the money I’ve already spent on them.