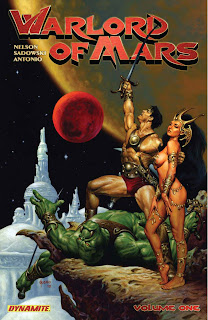 It’s a story most of you will already know. John Carter, Confederate soldier and immortal, falls comatose in a cave and wakes on Mars, called Barsoom by its inhabitants. He falls in love with Dejah Thoris, princess of Helium, fights four-armed green men, two-armed red men, great white apes and anything else that gets in his way. Once that’s all sorted out, the two of them settle down to raise a nice egg.

This volume collects issues 1 to 9 of the ongoing series, adapting the first of Edgar Rice Burroughs’ books, A Princess of Mars. Though my memories of that book are distant and foggy - it must have been twenty-five years ago that I read it - my impression is that this is a faithful adaptation. Despite the pin-up covers, it’s a surprisingly solid read, and I couldn’t help getting caught up in the story all over again.

It’s easy to overwrite an adaptation. Boom’s Do Androids Dream of Electric Sheep? – which crammed in every single word of the novel – showed how unreadable the results can sometimes be. Arvid Nelson’s script here is unfussy and effective, and gets out of the way whenever it can; there are many wordless pages. Admirably, it doesn’t ride a thoat over the fact that Carter isn’t a modern hero.

For example, like Conan of Cimmeria and Anthony (“Buck”) Rogers, he doesn’t place much value on the lives of his enemies. He leaves a city full of people to be pillaged by forty thousand tharks that were under his command; he doesn’t relish that, but accepts it as the cost of doing business. Also, his moral certainties are never seriously challenged, nor is his right to impose those standards on the “savages” of Barsoom.

That sometimes seems a little silly: tharks live for up to a thousand years, but none of them have ever discovered that being nice to their thoats makes them easier to handle? And one might observe that his Southern gentleman’s honour is actually somewhat wobbly; he despises a Thark female for her betrayals, but murders every last member of the Zodangan court despite accepting a position in their army.

I enjoyed artist Stephen Sadowski’s run on JSA, and his work here is of a similar standard. The action is nearly always very clear, and it’s rarely difficult to tell characters apart, even the tharks. Though you might wonder what an artist like P. Craig Russell or John Ridgway would have done with the material, this is a belt and braces adaptation, and Sadowski does the job that’s asked of him. Colourist Adriano Lucas resists the temptation to use seven shades of red for Mars, but Carter’s skin is a peculiar shade of purple in some night scenes.

Ironically the book’s only real problems are also its biggest attractions: the Heliumite Barsooms of princess Dejah Thoris. Indisputably attractive on the covers, they embarrass in the book, and take the reader out of the story to ruminate on how impractically huge they are, and how resistant they are to the admittedly lessened effects of Martian gravity. And could anyone be so comfortable in a metal minikini that they would wear one, all the time, by choice?

(We came perilously close to naming our first daughter Dejah. We decided against it because (i) we thought she’d get sick of people saying “Have we met before?” and (ii) it seems to be pronounced Dee-Jah, which doesn’t sound so good. Looking at some of the images in this book, I think perhaps she dodged an embarrassing radium shell.)

The book closes with forty pages of notes, sketches and alternate covers, many of which are very impressive. A thumbs down to J. Scott Campbell’s sex-kitten Dejahs (though they were probably good for sales), but thumbs up to Lucio Parillo and Patrick Berkenkotter’s fierce and tough-looking John Carters.

It’s a workmanlike comic, but an entertaining one, and a good way to bring the legend of John Carter to people who might imagine the original novel to be a bit dry. It’s not high art, but then neither was the novel. Sex and violence are front and centre, and they never go out of fashion: this is pulp with high production values. If the forthcoming film plays to its medium half as effectively I’m going to be a very happy sorak.