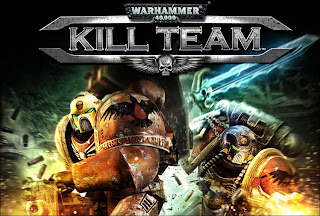 This twin stick shooter acts as an aperitif for the full price Warhammer 40,000: Space Marine, but works in isolation. There are only five levels, all part of an assault upon an ork Kroozer, but each takes forty minutes or so to complete, and the different talents of the grunts provide a good deal of replayability. As a Sternguard Veteran the player mows the orks down the minute they pop out of their cauldrons; the melee weapons of the Librarian give them time to unholster their weapons, requiring more tactical play.

It's quite a tricky game in places, and not always intentionally. Set brightness to full for the best chance of spotting holes in the deck, and play the first level over a few times to unlock essential perks before proceeding. The camera is often a bit too distant from the action, this player frequently taking hits from nasty little guys he just hadn’t noticed.

The game's great weakness is its frustrating penultimate level, set inside the ork Cargo Teleporta facility, which among other things involves a lengthy set piece battle with a carnifex followed, without checkpoints, by an ambush that is very difficult to survive, making it necessary for less capable players to replay the carnifex four or five times too often.

Another part of that level advises you to get to a safe distance before detonating explosives, but prevents you from doing anything of the sort, forcing you to run helter-skelter across a poorly-defined network of walkways while they collapse, with sudden death on either side, the experience not enhanced by debris and pillars that obscure the player's line of sight.

The offline multiplayer mode is noisy fun, and features an interesting mechanic: sharing power-ups (including health potions) between players when they stand nearby. This means the better player doesn't need to hold off collecting power-ups, but is discouraged from running off on their own, creating a nice balance. A survival mode is good for a few minutes, but players are unlikely to return to it much once the achievement is gained.

Kill Team is a decent, cheap game, the sort of thing the XBLA is made for, but I can't help wishing someone would produce a turn-based Warhammer game featuring the proper tabletop rules. When the very similar characters of Gears of War are doing so well, it's obvious why there's an interest in creating W40K action games, but imagine how disappointed people would be if the only chess games you could buy featured the pieces running around and shooting each other in real time…