Dick Barton and the Paris Adventure – reviewed by Stephen Theaker 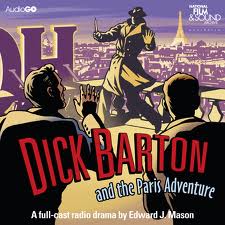 In a series of fifteen-minute episodes, Dick Barton and his chums work their way into the gang of black marketeer Spider Kennedy, who has a nasty habit of blowing up trains. Rather than the originals transmitted between 1946 and 1951, these are re-recordings produced for overseas transmission in 1949. Occasional line fluffs are not a problem, but do suggest these were recorded very quickly. Though there’s buzzing in places, the sound is good for such an old recording – particularly when it comes to the blood-curdling death screams.

Listening to the story over a couple of days, the accent Dick adopts in his guise as an American gangster begins to grate. Spider Kennedy quickly drops his own silly accent, but their initial meeting is unintentionally comical; think Vic and Bob as FBI agents. The story can be repetitive, the crooks becoming suspicious more or less every fifteen minutes, but the way Dick talks his way out of trouble is often quite ingenious. Its villains are colourful and menacing, if stereotypical (for example a lisping man Dick dubs “honeybunch”).

Though the story begins unpromisingly with a “half-wit” driving into a mine, it’s the now-historical setting of the story that modern listeners may find most interesting. It takes place against the background of post-war shortages, and when Barton goes to France, he notes that the operation is using the same beaches that were used for the D-Day invasion, and expresses surprise that there are any buildings left standing. That he uses the word invasion is interesting in itself.

The greater appeal, though, will be for fans of the character or the genre, and those who remember the story’s radio broadcast, all of whom will I imagine be delighted that these recordings exist at all. Those with only a passing interest in the material should probably listen out for an episode on Radio 4 Extra before buying.