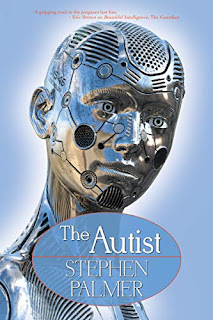 Stephen Palmer, who contributed "The Mines of Sorrow" to Theaker's Quarterly Fiction #46 (that was an excellent issue!), has a new novel out from Infinity Plus: The Autist.

"Data detective Mary Vine is visiting relatives when she uncovers a Chinese programme of AI development active within her own family.

Ulu Okere has only one goal: to help her profoundly disabled brother, whose unique feats of memory inspire her yet perturb the community they live in.

And in a transmuted Thailand, Somchai Chokdee is fleeing his Buddhist temple as an AI-inspired political revolution makes living there too dangerous.

In 2100 life is dominated by vast, unknowable AIs that run most of the world and transform every society they touch. When suspicions of a Chinese conspiracy seem substantiated, Mary, Ulu and Somchai decide they must oppose it. Yet in doing so they find themselves facing something the world has never seen before..."

Available on Amazon here for UK readers, and here for US readers.
Posted by Stephen Theaker 1 comment: 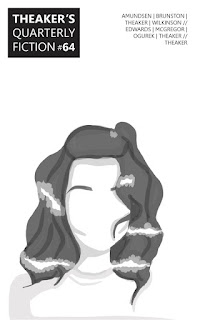 Sorry for making you all wait so long for this issue, especially the contributors, who have been so patient while I've been kept busy by freelance work. Rather than keep anyone waiting longer, we're going to put out the pdf now and return later to add extra formats.

This issue contains four stories: “September Gathering” by Charles Wilkinson, “Disappearer” by Matthew Amundsen, “The Haunted Brick” by Walt Brunston, and “Chemicalia” by me, plus twelve reviews, by Rafe McGregor, Douglas J. Ogurek, Jacob Edwards and me. One hundred and thirty-eight pages of fabulous fiction and rollicking reviews!


Here are the splendid contributors to this issue:

Charles Wilkinson’s publications include The Pain Tree and Other Stories (London Magazine Editions, 2000), while his stories have appeared in Best Short Stories 1990 (Heinemann), Best English Short Stories 2 (W.W. Norton, USA), Best British Short Stories 2015 (Salt) and in genre magazines/anthologies such as Black Static, The Dark Lane Anthology, Supernatural Tales, Theaker’s Quarterly Fiction, Phantom Drift (USA), Bourbon Penn (USA), Shadows & Tall Trees (Canada), Nightscript (USA) and Best Weird Fiction 2015 (Undertow Books, Canada). His anthology of strange tales and weird fiction, A Twist in the Eye, is now out from Egaeus Press and his second collection from the same publisher Splendid in Ash is available to order. A full-length collection of his poetry is forthcoming from Eyewear. He lives in Wales.

Douglas J. Ogurek is the pseudonym for a writer living somewhere on Earth. Though banned on Mars, his fiction appears in over forty Earth publications. Ogurek founded the controversial literary subgenre known as unsplatterpunk, which uses splatterpunk conventions (e.g. extreme violence, gore, taboo subject matter) to deliver a positive message. He guest-edited Theaker’s Quarterly Fiction #58: UNSPLATTERPUNK!, the first ever unsplatterpunk anthology, and then its follow-up, UNSPLATTERPPUNK! 2. He also reviews films for us. Recent longer works include the young adult novel Branch Turner vs the Currants (World Castle Publishing) and the horror/suspense novella Encounter at an Abandoned Church (Scarlet Leaf Publishing). More at www.douglasjogurek.weebly.com. Twitter: www.twitter.com/unsplatter.

Matthew Amundsen has published novellas previously in Theaker’s Quarterly Fiction #35 (“House of Nowhere”) and #50 (“A Murder in Heaven”) and short stories in such magazines as Cemetery Moon, Jersey Devil Press, Millennium SF & F and Starsong.  In addition, he has written literary and music criticism for alternative weeklies in Athens, Georgia, and brainwashed.com. When not writing, he is a sound engineer and musician in Minneapolis.

Rafe McGregor lectures at Leeds Trinity University and the University of York. He is the author of The Value of Literature, two novels, six collections of short fiction, and two hundred articles, essays, and reviews. His most recent book is The Adventures of Roderick Langham, a collection of occult detective stories.


As ever, all back issues of Theaker’s Quarterly Fiction are available for free download.
Posted by Stephen Theaker No comments: