I fell in love with this game when browsing a replay movie. As Master Chief, the last hope for humanity, I had fought my way down a bog-standard corridor on my way to more exciting stuff. Watching the replay, I paused the game and zipped the camera down to the other end of the corridor to watch my death-dealing approach from the point of view of my enemies. That was cool enough in itself, but then I noticed one of the pint-sized grunts running off down a corridor. What was he doing? I took the camera down that same corridor, and watched him hide in the darkness as I ran past. Once I was gone, the grunt said with relief (words to the effect of), “I’m glad he’s gone!” Genius! I’ve rarely seen such attention to detail in a game – or perhaps it’s better to say that the attention to detail has never been highlighted in such an effective way. Like the achievements you can gain in this and other Xbox 360 games, the features of Halo 3 encourage you to play and explore the game to its fullest.

I haven’t talked yet about the gameplay itself. I wasn’t a huge fan of Halo and Halo 2, perhaps as a result of picking them up a few years after their release, by which time I’d already played other games incorporating their innovations. I’ve always found online gaming a bit of a chore, which killed part of their appeal for me. I also, to be honest, found them a bit hard!

I’m enjoying Halo 3 much more. For one thing, I’m finding it easier, thanks to your health (at least on the Easy level) being a single shield, which fully recharges in cover, avoiding the death by attrition which always did for me in the previous two games. For another, it’s currently the state of the art in videogames, and so its ideas are as yet unsullied by imitators.

The gameplay options it offers are endless, both in terms of online options, but also in every individual moment – every weapon has its uses in every situation, and every situation responds to a dozen different approaches.

Finally, we are always starved of proper, full-on, big-budget science fiction in the cinema. So it’s a joy to watch a science fiction story as epic as Halo 3’s unfurl, even if it’s on the small screen.

There’s a lot more to be said about this game; the game itself is a conversation that will continue for years to come. Despite playing it all the way through I’ve barely scratched its surface. In terms of Hollywood blockbusters, Halo 3 would be The Matrix or the Lord of the Rings, movies that satisfy on a visceral level, but also repay and stand up to sustained scrutiny. 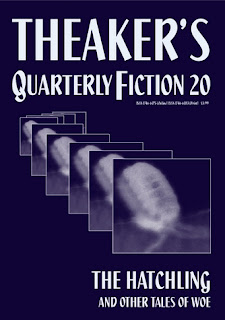 The Big Two-Oh: Celebrations and Apologies!

So this is it for another year – our fourth year of issues (even if it’s only been three and a bit years since the first came out). I’d love to say that this has been a great year for Theaker’s Quarterly Fiction, because in many ways it has. Our downloads have increased immensely and even our print sales have gone up a bit. People are starting to hear about what we’re doing. Listings on places like www.duotrope.com, www.ralan.com and the AA Independent Press Guide have brought dozens of submissions to our inbox, and the stories which we have accepted have enriched the magazine in every way. But I can’t bring myself to say it’s been a great year when it was the year our best friend died, leaving us utterly shaken. He’d spent Christmas with my family for something like the last six years, and while that sadly reflects the fact that he never managed to find someone special to create his own Christmases with, they were always good times, and it’s hard to face this one without him around. Apart from anything else, he nearly always bought superb presents for me. (Last year it was The Lurker in the Lobby, a fascinating overview of Lovecraftian cinema.)

I won’t spend the whole editorial being sad, though. It is Christmas, after all, and however much I miss my friend, I’m in ecstatic anticipation of the new Doctor Who Christmas special, and the Marks & Spencers pre-cooked turkey crown in the fridge looks as delicious as it does every year!

In this issue we have the first portion of a new novel by my co-editor, John Greenwood. I made him co-editor in recognition of the fact that he was writing half the magazine at the time – it would be unfair to reject his work now to avoid accusations of bias! And why avoid those accusations? I am biased, no doubt about it. I have a sneaking suspicion that with this novel, as perhaps with his Newton Braddell series, John is pandering to me somewhat, since he packs into each of them everything I want to read whenever I pick up a book (rare as that tends to be nowadays). It’s as if he has made a careful study of my literary tastes and preferences and custom-written a novel to entertain me. The Hatchling is his paciest, most thrilling and most atmospheric piece of writing to date, and if I could get away with reprinting it in every issue from now to eternity I would.

Next, Bruce Hesselbach regales us with a Tale of Yxning, "Contrarieties". Like The Hatchling, this is a story that hits the nail of my tastes so squarely on the head that it is almost uncanny. And the last story of the issue is the concluding part of Michael Wyndham Thomas’s serial, After All, "A River. It Had to Be." It’s been a privilege to publish this fine serial in these unworthy pages.

To both authors I owe an apology (in addition to the one I owe Bruce for the appalling illustration of a plant pot falling on Yren Higbe’s head that marred the publication of his story in TQF#19). Michael Thomas’s serial appeared in all six issues this year, while Bruce Hesselbach’s Tales of Yxning appeared in three, and yet neither author has had the cover devoted to them. The first cover was a portmanteau covering all the stories in the issue (just one postage stamp-sized illustration related to After All), and the next two were devoted to Howard Phillips’ The Doom That Came to Sea Base Delta. The fourth cover of the year featured a creature from the fabulous "Ananke" by Jeff Crook, and the fifth concerned "The Walled Garden", by Wayne Summers, not that anyone would have been able to tell, thanks to my lack of drawing ability. Then this sixth issue has a cover relating to The Hatchling. So that’s four out of six covers given over to our in-house writers, and that’s not at all fair.

The reason is that we knew way in advance what in-house material we had in hand, and once draft covers were drawn up, even though other material came in, I didn’t want to start over on the covers, out of sheer laziness!

In 2008 I’ll make much more of an effort in this regard: I’ve made a vow that none of the covers will be devoted to anything written by myself, John Greenwood or Howard Phillips (unless there is nothing else in the issue).

That brings me to something else that I don’t feel we’ve done particularly well this year: reviews of the books people have sent us. If you look at page 72 of this issue you’ll see my review of Test Drive by DJ Burnham, a book I did not finish reading. As a one-off that wouldn’t be too bad, but it follows similar non-reviews of DF Lewis’s Weirdmonger and Nemonymous #7 (aka Zencore!) in previous issues. For that matter I didn’t get very far through Apex #10 before writing a short review, and Apex #11 stands on my desk now, just as an interesting book by the name of Triangulations stands on my co-editor’s desk. It’s a bit of an embarrassing pattern. We just don’t get around to reading them. In the case of some books that are sent to us on spec, or that we’ve bought ourselves, I don’t feel too guilty, but in the case of something like Apex or Nemonymous where the author has offered review copies and we have specifically requested them, it’s very poor of us.

I can’t promise that we’ll do better next year. For one thing, what really interests me about other small press publications is their methods, philosophies and goals, rather than the stories within. I’m fascinated to see what people are doing, and love to think about the reasons they are doing it. But (and I doubt anyone will disagree) a reviewer should really read the book too! Another issue is that reading an entire book for review takes about as much work as proofreading an entire issue of TQF, and for me it often comes down to doing one or the other.

So while I can’t promise to write better reviews, I won’t ask people specifically to send us review copies, and I apologise to anyone I’ve asked to send us a review copy in the past. If you do send us review copies of your work, I think you’ve had fair warning of the poor quality reviewing you can expect! (For really good reviewing, visit the website of the excellent Whispers of Wickedness.)

So here’s to the end of a very exciting year for this flawed but good-hearted and tenacious magazine! Twenty issues down, but the next will be the best yet – because every issue is! – SWT

The Big Two-Oh: Celebrations and Apologies!

An Inconvenient Inheritance * Tangling with Grunewald * The Subterranean Ministry * Abroad, Unarmed and Incommunicado * Another Road to Juliaca * An Audience with El Alcalde * The Prison Under the Lake * Night of the Lakemother

Helen and Her Magic Cat