Oedipus, Carthago, Sweet Tooth and other reviews in brief 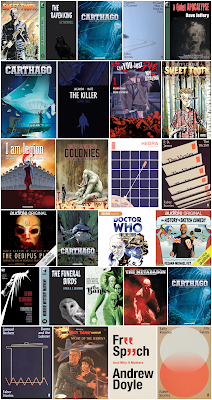 Brief reviews of the books I finished reading (or listening to) in February. Creators, publishers, etc as per Goodreads; apologies to anyone left out. (Apologies as well to everyone waiting for TQF69! Almost there!)

Hedra, Jesse Lonergan (Image Comics): Short, silent graphic novel about a spacewoman who sets off from an Earth devastated by nuclear war to find plant life that can survive in our soil. Interesting use of panels throughout, for example some that twist around the page to convey the feeling of crawling through caves. ***

The Victim, P.D. James (Faber & Faber): A former assistant librarian thinks back to the year that followed his divorce, and all the effort he put into preparing what he thought would be the perfect murder. It's very good. I was surprised by how unconcerned he was about DNA evidence, but then realised it's from 1973. ****

I Am Legion, Vol. 1: The Dancing Faun, John Cassaday, Fabien Nury, Laura Martin (Humanoids Inc): Two supernatural body-swapping blood creatures, one in London and one in Nazi-occupied Romania, are up to no good. One of their abandoned bodies sparks a murder investigation. Looks great throughout, but it's very much a chapter of a story rather than a complete story in itself. ***

Carthago, Vol. 2: The Challenger Abyss, Christophe Bec, Eric Henninot, Milan Jovanovic (Humanoids): A scientist's daughter is kidnapped by a reclusive billionaire, to force her into joining a megalodon hunt. A big summer blockbuster of a comic that already had a lot going on before throwing a giant yeti, a secret undersea base and a dinosaur attacking a U-boat into the mix. The animals look spectacular throughout. ***

The Raven King, Liz Tuckwell (Demain): DI Lis Liszt of the Supernatural Crimes Squad is assigned a sneery DC while they investigate the disappearance of the ravens from the Tower of London. Nice little story. The denouement perhaps overestimates the effect of throwing one's female body at a hulking thug during combat. ***

Sweet Tooth: Deluxe Edition, Book One, Jeff Lemire, José Villarrubia, Michael Sheen, Carlos M. Mangual (Vertigo): After Earth is devastated by plague, some of the survivors start to have children who appear to be human-animal hybrids. Gus lives in the woods with his father, but gets forced out into a world that's not kind to people like him. A classically Vertigo mix of fantasy and violence. ****

The Oedipus Plays: An Audible Original Drama, Sophocles (Audible Studios): This was one of my favourite ever Audible books. The first two plays, despite their tragedies, often had me chuckling thanks to the dialogue sometimes sounding, in the mouths of modern actors, like an Absolutely or Armstrong and Miller sketch. For example: "I will go, but you know there are conditions." / "Tell me. Once I hear them I'll know what they are." At times the arguments people had sounded just like online arguments, with all the same tactics and complaints: people haven't changed all that much! The drama still packed a punch. Then the third play knocked my socks off. Hayley Atwell was thrillingly virtuous as uncompromising Antigone, doing what she thinks right despite the consequences, and Michael Maloney was equally excellent as the king whose desire for order and obedience leads to his own ruin. The scene where his son tries to persuade him to clemency was especially stunning, and so full of wisdom. There's a reason new adaptations of these plays are still being made, twenty-four centuries after they were written. *****

Sweet Tooth: Deluxe Edition, Book Two, Jeff Lemire, José Villarrubia, Carlos M. Mangual (Vertigo): A man of violence tries to look after a gentle little deer-boy, whose very existence could be to blame for humanity's doom, or could be its salvation. It's enjoyable and looks great, but on the whole it's quite familiar territory. The symbolic covers for each issue are very good. ***

Carthago Vol. 3: The Monster of Djibouti, Christophe Bec, Eric Henninot, Milan Jovanovic (Humanoids): Dr Melville and two colleagues take individual submersibles down into the ocean off Djibouti to look for a giant shark, with predictably unfortunate consequences. Other shenanigans are interspersed among awesome drawings of giant beasts and wonderfully detailed dinner spreads. ***

Can You Just Die, My Darling? Vol. 1, Majuro Kaname (Kodansha Comics): A boy gets infected with an illness that makes him want to murder the girl he loves, Hanazono. It also gives him super-strength. He resists, but everyone else in school loves her too and the infection is spreading. On the whole, rather unpleasant, but Hanazono was quite funny. ***

The Devil's Own Work, Alan Judd, Matt Godfrey (Valancourt Books): After a decent first book, a writer is made much more famous by his scathing review of a big name author's latest tome, and is invited to interview him. Only one will leave the room alive! An interesting story of supernatural literary ambition, read very well by Matt Godfrey. ****

Batman: The Dark Knight – Master Race, Frank Miller, Brian Azzarello, Andy Kubert, Klaus Janson, Eduardo Risso, John Romita Jr. (DC Comics): Surprised by how much I enjoyed this, after how much I didn't enjoy Holy Terror. Plus, part of The Dark Knight Return's appeal was it being the last Batman story, and sequels make it just another Batman story. But this was great fun. I loved Andy Kubert's art, and how epic and legendary it all felt. ****

The Funeral Birds, Paula R.C. Readman (Demain Publishing ): A can-do wife joins her detective husband on the case of a murdered woman. Needed a bit more editing (e.g. "It looks to be a grave. An old very one."), but I was amused by the husband/wife team and the way the husband's hunches came via a ghost granny making him want to poop. ***

The History of Sketch Comedy, Keegan-Michael Key and Elle Key (Audible Original): An enjoyable audiobook about the history of sketch comedy, from the ancient Greeks through to one-season wonders on Netflix. Co-writer and narrator Keegan Michael-Key also talks about his own influences and career, and acts out favourite sketches like Fork Handles with infectious enthusiasm. Nice! If there's a criticism, it's that it makes US comedy sound rather rule-bound and regimented, but maybe that's because it is? The "You can't do that!" refrain in each chapter sounds a bit odd to listeners used to sketch shows where people regularly do all that and more. I was also struck by how few US sketch shows there seemed to be, whereas the episode about the UK was packed solid even without mentioning Not the Nine O'Clock News, Harry Enfield, French & Saunders, The Fast Show, Absolutely, Big Train or The League of Gentlemen. ****

The Banks, Roxane Gay and Ming Doyle (TKO Studios): Three generations of women team up in an attempt to rob a creep. There's potential in the idea but the book feels far too rushed, with duff dialogue, plot handwaving and even unfinished art in a few places. The robbers keep saying how good they are, but seem like complete blunderers. **

Doctor Who and the Zarbi, Bill Strutton, read by William Russell (BBC Audio): The first Doctor and chums on a world of giant insects! Oddly fond of this since it's long been the audiobook I put on when I'm poorly and need to sleep. It's perfect for such times because William Russell's reading is warm and grandfatherly, and the story is very, very dull. ***

The Killer Vol. 1: Long Fire, Matz and Luc Jacamon (Archaia): A ruthless hitman thinks about his career while waiting for a target to show up, then scarpers to Venezuela when things go wrong. Apparently I read a different edition of this already in 2011, but I didn't remember much after the first issue. His worsening frame of mind is conveyed in interesting ways. ***

Robert Silverberg's Colonies: Return to Belzagor, Vol. 2, Philippe Thirault and Laura Zuccheri (Humanoids): Second and final part of an adaptation of Downward to the Earth follows a bunch of humans on their journey to see a mysterious ceremony of renewal. A good story, but the book's biggest strength is the art of Laura Zuccheri, who really makes it feel like we are on an alien planet. ***

The Metabaron Vol. 2: Khonrad, The Anti-Baron, Alejandro Jodorowsky, Jerry Frissen, Valentin Sécher (Humanoids): The Techno-Admiral's flunky Tetanus devises a plan to destroy both his boss and the Metabaron by cloning an Anti-Baron, but it all goes horribly wrong, especially for the clone's mothers. Typical Jodo-nonsense from the Incal-verse: beautifully drawn and full of casual misogyny. ***

A Quiet Apocalypse, Dave Jeffery (Demain Publishing): In an England where a virus killed almost everyone and deafened most of the survivors, a former teacher kept as a slave for his ability to hear tries to make his way to freedom. Appropriately bleak, but malapropisms, mistakes and overexuberant prose work against the post-apocalyptic tone. **

Carthago Vol. 4: The Koube Monoliths, Christophe Bec, Milan Jovanovic, Eric Henninot (Humanoids): The megalodons become public knowledge after a terrible tsunami leaves one aground in Malaysia. Spectacular art as ever, with beautifully drawn animals and awe-inspiring undersea locations, but it's book four now and the ongoing story has barely moved forward since book one. ***

Mr Salary, Sally Rooney (Faber & Faber): A 24-year-old woman returns from Boston to Dublin to visit her dying father, and stays with an older relative by marriage who lent her a room during her penniless university days. About as steamy as a book can get without being explicit. ****

Dante and the Lobster, Samuel Beckett (Faber & Faber): Belacqua goes out to get some stinky cheese but it isn't stinky enough. He collects a lobster for his Italian tutor, and gets upset when he realises it's still alive and she's going to cook it. The book includes 14 blank pages at the end for anyone minded to write a continuation. ****

Free Speech and Why It Matters, Andrew Doyle (Constable): A short (very short: the main text ends at 55% of the ebook) run-through of arguments in favour of free speech, arguing that protecting the free speech of our political enemies is a key part of protecting our own free speech. Not funny like his Titania McGrath books, but it makes its point. ***

Buck Danny Vol. 1: Night of the Serpent, Francis Bergèse (Cinebook): While flying over the Korean DMZ an American is dazzled and left reliant on the autopilot, which stubbornly refuses to go anywhere but north. Buck Danny (in his 49th Belgian tome, but first from Cinebook) is involved in the rescue mission. A good, detailed, Bigglesish adventure. Had to re-read the bits that take place in darkness to properly understand what was going on. ***

Sergeant Bigglesworth, C.I.D., Captain W.E. Johns (Hodder & Stoughton): After World War II ends, Biggles and his chums get a job investigating airborne criminals. Their first assignment is to stop a gang of ruthless thieves led by a Nazi and an American mobster. It's the early Sopwith Camel stories that I love, but this later book (the 32nd) had its moments. Biggles is surprisingly obnoxious at times, but made me chuckle with his occasional ejaculations. (Maybe I shouldn’t have drawn attention to this ebook: it’s now been removed from the Kindle store.) ***

A Good Man is Hard to Find, Flannery O'Connor (Faber & Faber): A racist grandma gets her son and his family into serious trouble by sneaking a cat into their car and asking to see a plantation on which she was wooed in her youth. It's very good, but, like Truman Capote's In Cold Blood, I rather regret reading it, because now it's in my head forever. ****