Imagine if Godzilla didn’t turn up for one of his movies, and humans had to fight the alien menace in his stead! Or if the creatures from Starship Troopers landed on Earth! This is mindless fun at its purest, as you run around blasting alien invaders with your bazookas and missiles.

It’s easy to see why the game has found a home on the Xbox 360, following the huge sales of other pick-up-and-play games via the Xbox Live Arcade.

The only hint of strategy lies in your choice of weapons before each mission, and that’s a lot of fun – do you go in with two sets of bazookas, or a bazooka and shotgun, or a long-range homing missile and a sniper rifle? There’s a lot of choice. I haven’t spent much time using the vehicles dotted around the landscapes – like Crackdown, this is too much fun on foot to make the vehicles attractive.

One notable thing about this game is its huge draw distance, meaning that it’s common to see giant ants and spiders hopping over a distant landmark – which you can then blast to smithereens with a missile, sending their curled-up carcasses flying into the air.

This is a budget release, so it’s great value for money, but it’s also an ideal game for renting. You’ll see most of what it has to offer in a single week, but what there is of it is a lot of fun. After the insects come the giant spaceships, giant robots, attack walkers, and even more insects, all of them just waiting for you to choose the right method of destruction. You haven’t lived until you’ve fired a bazooka up into the guts of a kilometre-wide spaceship, bringing it down upon your head.

If Earth Defence Force 2017 has one downside, it’s that the achievements have clearly been bolted on at the last minute – the points are divided up in huge chunks for finishing all 50 of the game’s levels on each skill level.

I have to spare a word or two for the brilliantly-judged and hilarious voice work. Accompanying you on your bug-hunting adventures are your colleagues in the Earth Defence Force, a short-lived but loquacious bunch who always have a bon mot prepared, delivered in absolutely deadpan voices that utterly match the serious silliness of the game.

My favourite moment of the entire game – possibly of any game ever – came during a mission deep inside the alien insects’ burrows, when one of my companions called out, in deadly seriousness, in a tone as dry as Patrick Warburton after a week in the desert, something along the lines of: "We’re on a thrilling underground adventure." 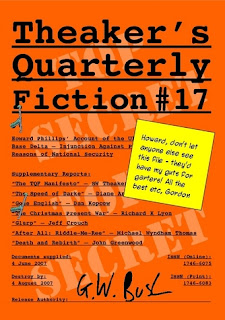 Hello! Welcome to TQF#17! This last couple of months have been very exciting for us, not least because TQF#16 was downloaded over 600 times! Not a lot by some standards, but for us it was flabbergasting. My flabbers are gasted through and through. It's very exciting, yet rather frightening, too – people are actually going to look at our work, and judge it.

Seeing all those eyeballs rolling in the direction of this issue made me think this might be a good time to put together a manifesto of some kind, to explain what the magazine’s all about. It’s important, for example, for potential contributors to understand that this is not, in many ways, a respectable magazine, and it doesn’t have a very respectable history… After all, it was originally set up with the express intention of exploiting the handful of authors I already had in my pocket (myself among them), and even now, when it publishes authors I have to treat with a bit more respect, it is still rather ruthless, at least in its determination to keep going!

So, what have we got for you in this issue? Which authors have sacrificed their reputations in order to bulk up our page count? As ever, of course, like it or not, there are further instalments in the Saturation Point Saga (by Howard Phillips), the researches of Newton Braddell (by John Greenwood), Helen and Her Magic Cat (by Steven Gilligan), and After All (by Michael Wyndham Thomas).

Cronies and indentured servants aside, Diane Andrews, new to these pages, calculates for us “The Speed of Darke”. In a strange world of filtered legend, recently delivered from the rule of the mysterious Monckes, life tries to go on.

When Richard K Lyon sent me the story of “The Christmas Present War”, a quick google revealed him to have collaborated with Andrew J Offutt on a series of novels. Given that I only had to look up from my monitor to see novels by the collaborator in question, the story was as good as accepted before I even read it. Thankfully, once I did read it, the story didn’t let me down.

Jeff Crouch has provided us with “Glurp”, the first story accepted for this issue. Like the substance in its title, this story stuck with me after my first reading of it, and I felt an uncontrollable compulsion to send the author an acceptance note. It might be wise to lock your valuables in a safety deposit box before you proceed, just in case the author has woven some strange, malignant science into his story’s telling that might force you, too, to do his bidding.

Sometimes I read and accept stories late at night, at times when I should really be sleeping. How else to explain the appearance in this serious and august journal of such a lunatic item as Dan Kopcow’s “Gone English”, a tale of the Bearded Avenger? Then again, it does remind me of Grant Morrison and Simon Louvish, a combination which will usually add up to an instant acceptance from these parts!

I hope you enjoy this issue as much as I enjoyed putting it together!– SWT

The Saturation Point Saga: The Doom That Came to Sea Base Delta

The Morning After ~ The Doomed Mission ~ A Fight to the Death! ~ Howard Needs Help! ~ The First Night of the Great Big Fear ~ Howard’s Grand Performance ~ Gonna Roll the Bones! ~ The Creature Attacks ~ Attack from Beneath the Waves! ~ The Dusty Waters ~ Things Get Worse ~ The Doom of Howard Phillips ~ The Ultimate Fate of Sea Base Delta ~ A New Note or Two ~ Return to Danger! ~ My Greatest American Adventures

The Speed of Darke

Newton Braddell And His Inconclusive Researches Into The Unknown

Earth Defence Force 2017 ~ The Last Mimzy ~ Pirates of the Caribbean: At World's End

Helen and Her Magic Cat