The Rise of Io by Wesley Chu | review by Stephen Theaker 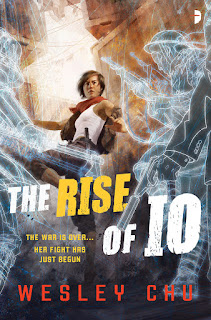 This cyberpunk action thriller takes place four years after the end of the Alien World War. Twenty-odd years before that, humans discovered that they had been sharing the planet all along with a secret race of body-hopping aliens, the Quasing, who arrived in a spaceship crash eons ago. Unable to survive unprotected in Earth’s environment, they had lived inside the dinosaurs, then inside the cavemen, and for the last few thousand years – an eyeblink to them – they have lived among us. Despite the Quasing pulling the strings, history played out pretty much how it did in our world.

When the invention of Penetra scanners revealed their foggy existence, things changed forever. At first they were hunted. This particular book (Angry Robot pb, 424pp, £8.99), which follows a previous trilogy (The Lives, Deaths and Rebirths of Tao) doesn’t say how that went, but given the Quasing’s immense political influence one imagines it went quite badly for the hunters. The war then saw the countries of the world taking sides between two Quasing factions: the Genjix, a nasty bunch who think progress comes from conflict, and hence encourage it at all times, and the Prophus, who began to feel guilty about the misery they had caused.

Our brave young hero is Ella Patel, who doesn’t know much about any of that. She knows the war lasted a decade, that it left India shattered, that it took her from Singapore and left her an illiterate orphan in Surat. Unsurprisingly, this has left her rather cantankerous, though not so much that it’d put anyone off reading about her: the way she irritates and needles everyone she meets is one of the most enjoyable aspects of the book. Whether it’s the other inhabitants of Crate Town, a desperate slum built out of shipping containers, or deadly Genjix super-assassins, she’ll do their heads in something rotten; it’s always amusing.

She annoys no one so much as the title character, Io, one of the least impressive of the Prophus Quasings. Long after the others left the Yucatán crash site and swam into the ocean in search of life to glom on to, Io was still trying to get communications working. She’s been catching up ever since, and it doesn’t help that her host humans have a habit of getting themselves killed, from the first sailor she possessed, to General Custer, through to secret agent Emily Curran, leaving Io in need of yet another new host: Ella, who doesn’t even pretend to respect her uninvited new passenger. She thinks Io is boring, full of dumb talk, but if they don’t learn to work together, neither will survive.

It’s a good set-up for a novel. Right next to the shipping containers of Crate Town a secret facility is in development, and, as Ella and Io work to investigate it, the narrative benefits of the protagonist having an onboard frenemy become clear. They can have lots of little arguments, debate the best course of action, and get at each other all they want without any need to explain why no one else acts during the conversation. Ella’s impoverished background means there’s a lot she needs to know, and we can learn it along with her. It also means she’s extremely scrappy and determined, a con artist and thief who leaps at the chance to join the good guys because it pays better.

The other side of it is that she’s not ready to fight. She’s underweight, unhealthy, and still carrying the physical and emotional scars of living a very hard and lonely life. So although there are action scenes, the book has to keep Ella away from the main mission at first. It takes five months of training and over half the book before she goes on her first solo job as an operative: this is very much the first book of a series. It works fine as a jumping-on point for those who haven’t read the previous trilogy, but less so as a standalone novel. Star Wars wouldn’t be the same film if the Death Star was still in one piece at the end of it, and while that isn’t exactly what happens here, the book may leave readers with a similar sense of anticlimax.

However, there is plenty to enjoy before that. The action is well done, Ella is a fine character, and there are signs that after this book’s tight focus on Crate Town and its surroundings the next one may open out a bit more. It sets up plenty of future conflict, and fans planning already to read the entire series will probably be very happy with it. ***

This review originally appeared in Interzone #266.
Posted by Stephen Theaker No comments: