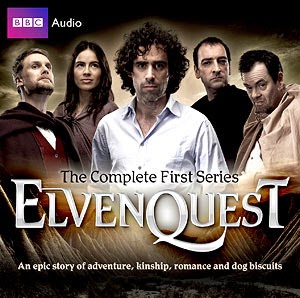 An example of the law of unintended consequences: as a result of buying a Sony Reader I now listen to a lot more radio. Turns out it’s perfect for listening to radio recorded on the PS3, and that’s how I came to listen to this highly enjoyable programme.

After doing a Q&A at a bookshop fantasy novelist Samuel Porter is approached by three figures in strange costumes: Lord Vidar the elf, Penthiselea the warrior woman and Dean, a dwarf. They need the Chosen One to save their world from Lord Darkness. But Samuel isn’t the Chosen One: it’s his dog. Amis bounds straight into the quest for the Sword of Aznagar, turning into a human upon arrival in Lower Earth, while Samuel is only convinced to join by the pointed arguments offered by Penthiselea’s proud bosom.

ElvenQuest starts ominously: there’s a joke about fantasy fans not having girlfriends in the first minute, quickly followed by “you people take all this stuff too seriously”. I was all set to strap on my +3 sword of indignation, but thankfully it quickly left that stuff behind to race through six very funny, imaginative episodes that showed real affection for the material being spoofed.

Given the proximity of their broadcast dates, you can’t help wondering if Kröd Mandoon and ElvenQuest sprang from the same round of pitches – if so, Hat Trick backed the wrong horse, because this was substantially funnier than Kröd. For example, one episode begins with a solemn recital of all the tasks facing the heroes, ending with “for as it is written in the Great Elven Book of Knowing, isn’t life just one bloody thing after another”.

The cast is excellent, far outshining that of Kröd: Stephen Mangan, Darren Boyd, Sophie Winkleman, Kevin Eldon and Alistair McGowan, sounding exactly like Rowan Atkinson as Lord Darkness. I expect it’s easier to get actors to London for a few days than Hungary for a few months! And unlike its television rival, ElvenQuest’s satirical net covers more than a single movie. Lord of the Rings is obviously a big target (if target is the right word for such affectionate ribbing), but there’s also a lot of Thomas Covenant in here.

Lord Darkness is consistently funny, not least when he has to check in to a retox centre to top up his evil. Readers of Groo #77 will feel the warm glow of recognition upon hearing many of the jokes about Amis, but they are just as funny the second time around. Some of the jokes are real groaners, but delivered with panache: the studio audience is having such a great time that it’s hard not to be caught up in the fun.

The ending sets up a second series, and I certainly hope one will be forthcoming. In the meantime, do listen out for repeats on BBC7.