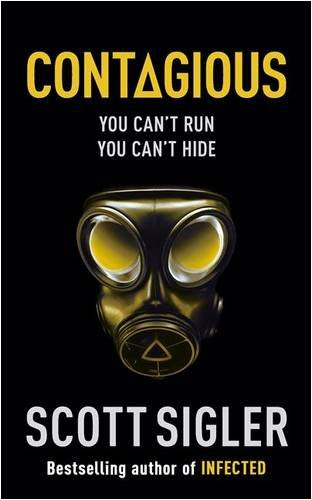 In this sequel to Infected, a prologue quickly brings new readers (and a new President) up to speed. The infected develop welts, kill their families, and die once pyramid-shaped aliens hatch from their bodies. The little aliens then start building stargates while the government tries to stop them. Former quarterback “Scary” Perry Dawsey survived the first novel by hacking off his genitals; here he takes the lead. Think The West Wing v Aliens with Michael Myers as the hero.

One of the shortest six-hundred page books I’ve ever read, this is split up into dozens of tiny chapters, one for every scene; it’s paced like a mini-series (you get to p. 131 before reaching the first line of the back cover’s plot summary), but cut like a music video, which gives it a style you might see as sketchy or punchy, depending on your point of view. The little aliens are not very scary, but the book is surprisingly brutal, and runs a nice line in body horror.

It’s a big sloppy puppy dog of a novel, daft and eager to please. It doesn’t surprise or innovate, but it’s perfect for the beach or a long train journey.