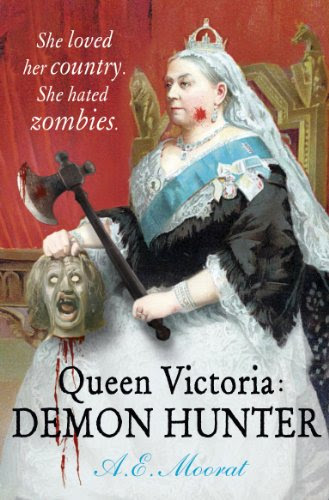 King William IV is dead, and Princess Victoria takes the throne aged eighteen. England and its monarch are threatened by the forces of darkness (among them the King of Belgium); luckily the new queen has supernaturally quick reflexes and is handy with bladed weapons… Essentially this is Queen Victoria as Buffy the Vampire Slayer, dealing with monsters, boys, evil plots and a hard-ass mentor.

The cover of this book is fantastic, and its tag line is magnificent: “She loved her country. She hated zombies.” Maybe, but it’s p.136 before she meets one, and she only spends about seven pages fighting them in total, being mostly occupied by werewolves. Clearly the zombie angle has been (smartly) played up for commercial reasons.

This is lightly plotted Kim-Newman-esque fun. Little is resolved by the end, and there’s sometimes a sense of characters being moved around like pieces on a board, but those characters, especially Lord Quimby and his dead manservant Perkins, are good ones. Though you don’t have to read this book to get its best joke, there are others, e.g. monster hunters named Hicks, Vasquez and Hudson. Don’t be too disappointed if this turns up in your Christmas stocking.