The Magicians, by Lev Grossman - reviewed by Stephen Theaker 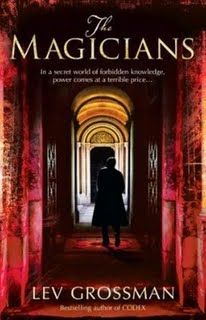 Quentin Coldwater is a rather sour over-achiever from New York, whose favourite books are the Fillory and Further series, which bear an uncanny resemblance to the Narnia books of our world. Before you know it, it’s teenage wish fulfilment time – he’s whisked off to magic school. But he finds that having your teenage wishes fulfilled isn’t all it’s cracked up to be.

Essentially, this is half-Potter, half-Narnia with a sprinkle of Miracleman, and at times the book feels as cynically commercial as that sounds, but it’s still fairly enjoyable. Grossman writes very well, the characterisation of his thoroughly unlikeable characters is excellent, and the storyline wraps up nicely in a single volume, which on its own is enough to set it apart from a lot of commercial fantasy novels.

What didn’t I like? The sarky snipes at Potter in the text seemed rather ungentlemanly, given how closely it followed the Potter template. As for the animal sex bits – if a woman’s ability to say no is taken away, because she’s been turned into an animal, and then you have sex with her, isn’t that effectively rape? I didn’t see much difference between that scene and the teacher putting Rohypnol in the school dinners… But then, reading further into the book, perhaps I wasn’t supposed to and should actually give myself a pat on the back for taking issue with it!

I think I’d have enjoyed it more if it had been an actual Narnia sequel. Alan Moore’s Miracleman drew a lot of strength from building on the original Marvelman comics, and it was easy to imagine how much more powerful this novel would have been if it had featured Aslan and the Pevensies instead of Ember and the Chatwins. But it was a fast-moving, well-plotted novel about a group of very realistic teenagers (even if they are the kind of teenagers that adults will find intensely annoying). I wouldn’t describe it as Harry Potter for adults, but older teenagers may well adore it.