The Nyctalope on Mars, by Jean de La Hire 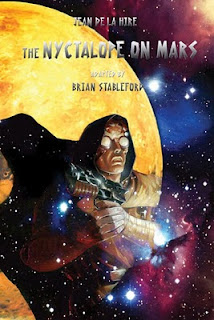 Saint-Clair, the Nyctalope, is a twentieth-century Riddick, able to see perfectly in the dark. It’s not much of a superpower, but it’s enough to put him one up on Flash Gordon! After twelve girls are abducted to become the wives of the Twelve – a criminal organisation which has established a base on Mars, in order to conquer the Martians from The War of the Worlds, before returning to conquer Earth – the Nyctalope heads to Mars to rescue them.

This is an old French pulp novel given the Penguin Classics treatment by Brian Stableford and Black Coat Press. As well as translating, Stableford provides much useful apparatus. A highly informative introduction puts the novel in context, draws out its themes, and provides biographical information. An afterword deals with the problem of the story’s uneven chronology, caused in part by its episodic construction, and partly by de la Hire’s decision to introduce contemporary figures. Thirty-six footnotes alert the reader to de la Hire’s many mistakes, scientific and literary. Reproductions of several covers round out a generous package. Numerous typos spoil the effect a bit, but I imagine Jean de la Hire would have been delighted to see his novel receiving such loving attention after all these years.

Perhaps I should say careful attention, rather than loving: I probably enjoyed this book much more than Brian Stableford, who calls it a “thoroughly badly-written book”. The novel is certainly flawed, but enjoyable nevertheless. I don’t need all books to be good; it’s okay for some to be silly and entertaining. This book delivers entertainment in abundance, even if it’s not always deliberate.

There’s an Austin Powers feel to the novel at times. For example, one of my favourite lines recognises that Saint-Clair must already know everything he is being told: “‘I know all that,’ said Saint-Clair, ‘but every time you repeat it, it seems new, and I admire you…’” (p. 63). I’ve heard of hanging a lantern on awkward exposition, but that’s more like hanging a lighthouse on it! In another scene (p. 114), two villains stare at a dial in total silence for an entire hour to see if the power levels fluctuate. There’s lots of pipe and cigar-smoking. Characters monologue at ludicrous length, and nobody in the book seems able to think without speaking out loud. Even when hiding from hordes of enemies they still murmur long speeches to themselves (p. 280, for example). The book is full of that kind of endearing daftness. At one point the Nyctolope seems to propose putting someone to death for (among other things) “an extreme irreverence for science” (p. 86).

The book plays interestingly with other texts, for example establishing early on that Wells was a historian rather than a novelist (though why France was apparently unaffected by the Martian invasion is left unclear), foreshadowing similar experiments by Philip Jose Farmer, Alan Moore, and so on. Similarly the Nyctalope himself anticipates the pulp heroes that would follow: Doc Savage, Flash Gordon, and so on, all the way through to Tom Strong.

But for me this wasn’t just of historical interest. It was exciting, amusing, eccentric and quite unique, and I’d recommend it highly to anyone who prizes those qualities.