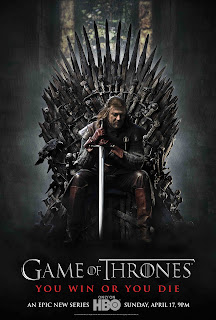 To quote Andrew Collins, where did it all go right? Heroic fantasy on television should look shoddy and embarrassing, not as sumptuous as Liz Taylor’s Cleopatra. The dialogue should be stilted and silly, not as sharp, wise or venomous as the very best on television. The cast should be self-consciously slumming, not delivering – as Sean Bean does – what might be the best performances of their careers. If fantasy on television can be this brilliant, why were we so happy to have Hercules: the Legendary Journeys? And it’s from HBO, a channel whose dramas I traditionally enjoy for one or two episodes before drifting away. Cinematic television is a lovely idea, and I watched the first episode of Boardwalk Empire as if it were a movie, but was never quite in the mood for the sequel. Game of Thrones, however, is the most watchable, thrilling HBO drama since Band of Brothers, a million miles away from the elegant tedium of a Carnivale. Perhaps most astonishing yet is that for all the talk of how expensive it was, the budget of these ten incredible hours of television was reportedly less than half that of a film like Knight and Day.

To a viewer who has not read George R.R. Martin’s original novels, it’s striking that the story told here bears little resemblance structurally to fantasies like The Lord of the Rings and its imitators. It’s not a simple quest from A to B, nor a straightforward narrative of good versus evil – although there are the first signs of an overwhelming evil to come from the frozen north. This story of great houses battling for supremacy, of intrigues, betrayals and assassinations, reminded me of Dune more than any heroic fantasies I had read. (Early on I wondered if this was in fact science fiction rather than fantasy, the long but irregular winters suggesting an alien planet, but later developments establish that this is a magical setting.) And that structure makes it ideal for television, because it throws the characters repeatedly together, constantly in conflict, rather than dispersing them on interminable hiking trips. The balance of power jerks violently about, every episode a game-changer.

If it weren’t for the slightly over-enthusiastic use of female nudity, and its budget-led coyness about showing the actual battles, I would love Game of Thrones unreservedly. There are lots of fantastic programmes on television, and there are lots of fantasy programmes on television, but this is one of the rare, joyful occasions on which the two categories overlap. It’s a shame that Sky’s decision to show it on Sky Atlantic has blunted its impact a bit here in the UK, but if you’re not a satellite customer, don’t worry: this is one you’d want to own on DVD anyway.