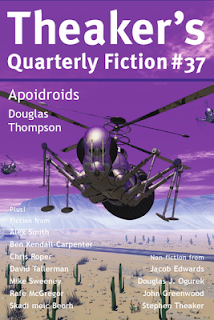 We have eight stories in this summer’s issue of Theaker’s Quarterly Fiction, and I’m immensely proud to be publishing all of them:


The editorial, “How Could a Person Up and Call a Person Wack?!”, addresses, in my clumsy way, the suggestion put to us in recent months that giving bad reviews to books is something we should avoid. I also discuss the unfortunate lack of female contributors to this issue, and set out one practical step I’m taking to improve the visibility of female writers in our magazine.

In a bit of a departure, we also have an article: “In the Shadow of Slartibartfast: Donald Cotton and Doctor Who’s Other Comedic Trilogy” by Jacob Edwards. You can see why it appealed to me.

Our review section stretches to thirty pages. In books John Greenwood and I look at The Art of McSweeney’s, The Captain Jack Sparrow Handbook by Jason Heller, The Damned Busters by Matthew Hughes, The Gift of Joy by Ian Whates, The Heavenly Fox by Richard Parks, Outpost by Adam Baker, Revenants by Daniel Mills, Spectral Press #2: The Abolisher of Roses by Gary Fry and Vampire Warlords by Andy Remic.

In the audio section I review three Doctor Who adventures: The Forbidden Time, The Sentinels of the New Dawn and The Hounds of Artemis. The film section covers Death Race 2, Insidious, Never Let Me Go, Red Riding Hood, Source Code and X-Men: First Class (three reviews by Jacob Edwards, two by Douglas J. Ogurek, and one by me). I review two comics this time: Baltimore, Vol. 1: The Plague Ships, and Buffy the Vampire Slayer, Season Eight, Vol. 2: No Future for You.

This 128pp issue is available in all the usual formats, all free except the print edition, which we’ve priced as cheaply as possible:

Which sweet fools lined up for literary exploitation this time?

Alex Smith lives in Bethesda, Maryland and he is a doctoral student of psychology at George Washington University. Alex’s poems and stories have recently appeared in Catch-Up Louisville, Food I Corp, and Theaker’s Quarterly Fiction #31. He is the author of a novella titled THE BERSERK and a book of poems titled LUX. His chapbook, BLOWN, was published by Superchief in 2011.

Ben Kendall-Carpenter lives and was born in Manchester. He enjoys cricket, the work of H.P. Lovecraft and J.G. Ballard, and listening to The Smiths. He is currently working on a collection of horror stories.

Chris Roper lives in Brighton, England, with his girlfriend of three years, Sarah-Jane. When not writing he enjoys travel, normally to tropical climates in Asia, and is a keen reader of horror and science fiction.

David Tallerman’s horror, fantasy and science fiction short stories have appeared in over thirty markets, including Lightspeed, Bull Spec, Flash Fiction Online and John Joseph Adams’s zombie best-of anthology The Living Dead. Amongst other projects, David has also published poetry (in Chiaroscuro), various film reviews and articles, and comic scripts through the award-winning British Futurequake Press. David’s first novel, comic fantasy adventure Giant Thief, will be published in early 2012 by UK publisher Angry Robot, to be closely followed by two sequels. He can be found at http://davidtallerman.net and http://davidtallerman.blogspot.com.

Douglas J. Ogurek’s work appears in or is forthcoming in the British Fantasy Society Journal, The Literary Review and Dark Things V (Pill Hill Press). Ogurek has also written over 50 articles about architectural planning and design. To this issue he contributes reviews of Insidious and Red Riding Hood. To TQF33 he contributed the astonishing “NON”. He lives in Gurnee, Illinois with his wife and their six pets.

Douglas Thompson’s short stories have appeared in a wide range of magazines, most recently Albedo One, Ambit, and PS Publishing’s Catastrophia anthology. He won the Grolsch/Herald Question of Style Award in 1989 and second prize in the Neil Gunn Writing Competition in 2007. His first book, Ultrameta, was published by Eibonvale Press in August 2009, nominated for the Edge Hill Prize, and shortlisted for the BFS Best Newcomer Award. His second novel Sylvow was published in autumn 2010, also from Eibonvale. A third novel Mechagnosis will be published by Dog Horn in autumn 2011.

Howard Watts is an artist from Brighton. He has previously provided covers for Pantechnicon, Dark Horizons and TQF, including the cover for this issue. His story “Totem” appeared in TQF36.

Jacob Edwards is currently indentured to Australia’s speculative fiction flagship Andromeda Spaceways Inflight Magazine, as Jack of all Necessities (Deckchairs and Bendy Straws). To this issue he contributes three film reviews and a paean to Doctor Who’s great lost humorist.

Mike Sweeney lives in Central New Jersey. His short stories can be found here and there. He’s especially fond of the ones over at Jersey Devil Press (www.jerseydevilpress.com).

Skadi meic Beorh is a writer of speculative fiction who presently lives with his wife Ember on the Atlantic Coast of Florida. He is the author of the story collection Always After Thieves Watch, the poetry collections Golgotha and New Irish Poems, the dictionary Pirate Lingo, and the novel The Pirates of St. Augustine.
Posted by Stephen Theaker

New comments are not allowed.